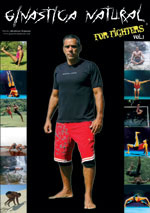 Register to Get Access to More Articles and Video


This is one of the articles found in BJJ Legends Magazine, Subscribe to get better, faster and tap out the competition.

Get the Magazine – Buy it NOW!

Alvaro Romano has spent more than 20 years developing and training a natural style that is practiced by many world-class fighters and athletes, including BJJ world champions, the Ribeiro brothers Saulo & Xande, and ADCC champion Rani Yahya, who dramatically tapped out Leonard Vieira in 2007.


BJJ: What is Ginastica Natural?

I study my body all the time; the life for me is the study of the movement. I create more and more exercises because you need a change for your body. If you keep doing the same exercises, your body gets used to it. You need challenge all the time in your life.


BJJ: You are the founder of Ginastica Natural and a Brazilian Jiu-Jitsu black belt.

A: Yes, I started Jiu-Jitsu in 1976 at Gracie Academy in Copacabana Beach. This was a Rolls(*2) and Carlson Gracie school. Rolls is my idol. I was acquainted with Relson (*3) and Rickson because I saw them all the time surfing. Relson is the first Gracie who surfed. In 1975, I went to Peru to go surfing. Rolls invited me to his house in Peru, showed me the philosophy for Jiu-Jitsu for my life, and the Gracie diet that his father Carlos Gracie created. He said when you go back to Brazil, come to my academy and start Jiu-Jitsu, and I said “OK!”. It changed my life. Fabio Santos [was] my classmate in the university. Fabio Santos, Rolls and I were always together. At Rolls‟, I never paid because I helped his class with warm ups. At that time, nobody did stretching.

US Grappling, Sumission Only!