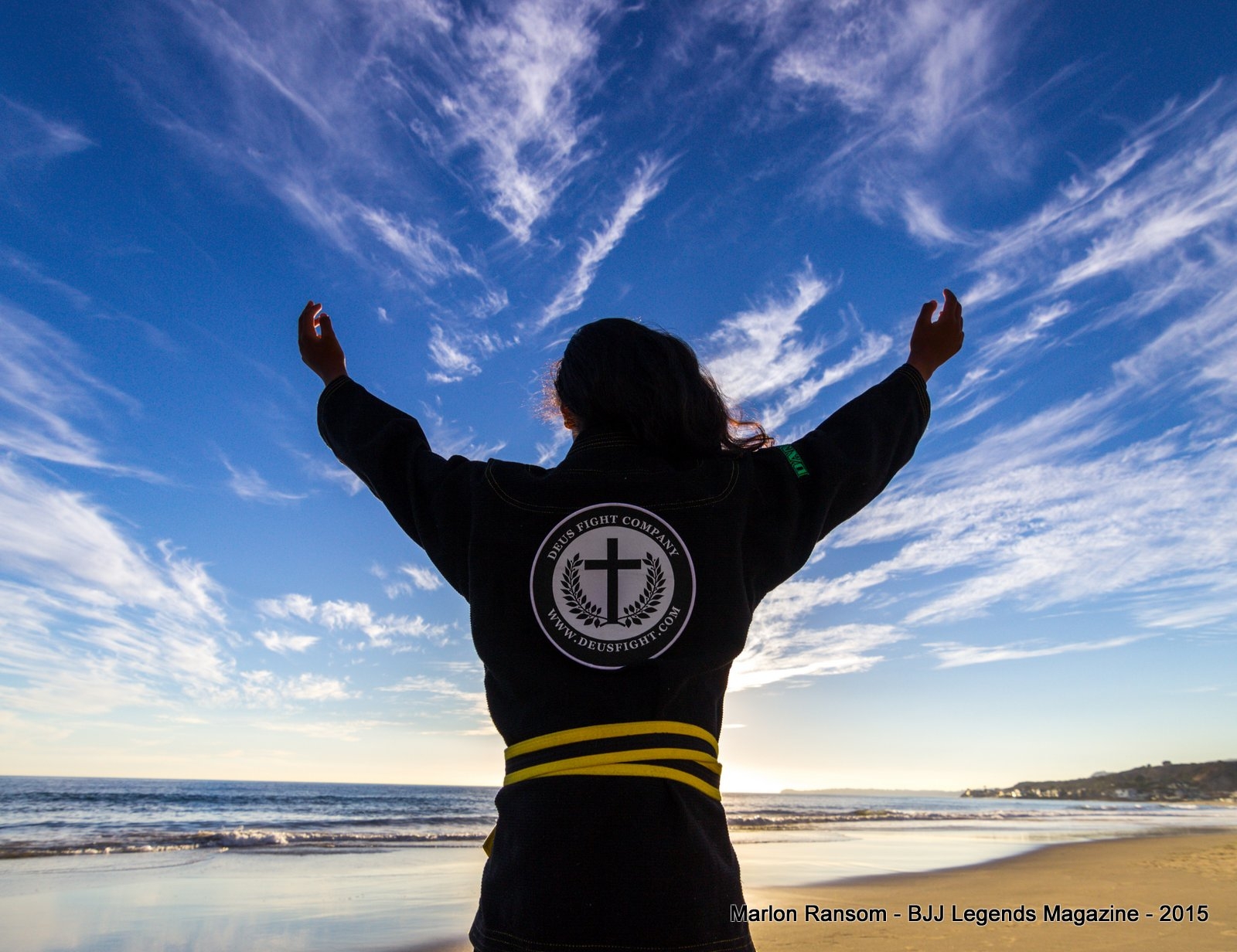 A very familiar scene at BJJ tournaments is a competitor on his or her knees, head bowed saying a silent prayer before they head out to shake the referees and their opponents hands. The aforementioned BJJ players faith is on full display, but when it comes to faith and business the potential for scrutiny is a sure bet. The faith referenced is Christianity and it is the foundation of a new BJJ merchandise and clothing company aptly titled DeuS Fight Company.  The owner, Geoffrey Van Haeren is an unapologetic Christian who has his faith and his love for BJJ on full display. As he tells it, his mission is far bigger than himself and he is determined to thrive and spread the word of God both on and off the mat. Our mission is to find out just how he intends to engage the BJJ community, withstand the naysayers and build a business that is rooted in Christianity.

Is there a meaning behind the name of your company?
GVH: Yes, thanks for starting with that question. DeuS means God in Portuguese, which correlates with our Christian foundation, not to mention our passion for BJJ. I’d also like to elaborate on the letter structure, we capitalize the D and S in DeuS to emphasize that God is the beginning and the end, the Alpha and Omega.

What would you say are the main reasons your brand will have staying power and succeed?
GVH: I feel like people are looking for something different, something deeper than just a great product. Don’t get me wrong, great products are essential, but I think consumers want to be a part of something meaningful, something that makes a difference with their direct involvement. I also believe the bible verse ‘Romans 8:31’ will play a major role, “If God is for us, who can be against us?”

Would it be fair to say that some people may take issue with the religious theme of your company?
GVH: Yes, for sure, many may take issue, but I believe just as many if not more will embrace what we stand for. I kind of view it as a risk reward formula, and currently the reward is well worth any real or perceived risk. I have had dialogue with people via phone, email and in person and I don’t hesitate to share with them the physical, mental and spiritual fight we as Christians endure on a regular basis. It is all about relying on our faith and God and his word to empower us, and take us to levels we never dreamed possible. Truth is when people ask questions or engage in any way it helps tear down walls and at a minimum creates understanding and mutual respect even if there may end up being no common ground from a religious viewpoint.

Are Christians the target market and would issue be taken with non-Christians buying from DeuS?
GVH: First off, I would encourage any potential customers who do not share our faith to do their research on what we stand for before making a purchase. That being said, yes, Christians are indeed our target market but we intend to grow that market not by exclusion, but by inclusion.
We are confident that those who check out our site, believers or not will see that our products are top of the line and our actions through our social projects will move them to potentially getting involved.

What is your mission for DeuS?
GVH: My aim is to offer cutting edge, well crafted and original merchandise that rivals or surpasses others in the marketplace. On a deeper level, my goal is to create a culture of social consciousness – a culture where helping those less fortunate is something everyone associated with DeuS does naturally, because it’s the heart of who we are and what we do, not an effort that is out of the ordinary or newsworthy. Combining that spirit of helping in order to strengthen souls, hearts and bodies, on and off the mat, through the presence of Jesus Christ…now, that is the ultimate mission of DeuS.

Can you tell us about one of the social projects you are involved with?
GVH: Gladly, the unrest and simmering turmoil in Baltimore is witnessed on news stations worldwide. What most failed to realize is that after the cameras leave the community still suffers, especially kids. With few positive outlets and an economically challenged area the need for our involvement was something we chose not to ignore.  We partnered with Recreation Church headed by Pastor Vincent Dehm, with a goal to help the youth by introducing them to BJJ free of charge. It is called Recreation Jiu Jitsu and children in the Park Heights area can have their parents or guardians sign them up on the church site. DeuS was proud to fund their first set of mats and Gis for the kids. One thing that is always needed and welcomed is BJJ players who are interested in helping with instructing the kids, whether they live in Baltimore or if they’re traveling to the area and would like to be involved, feel free to contact me. Shameless plug, I know.

What is behind the drive you have to make this company a success?
GVH: There is not short answer for this question, but I will give it a try. My kids have been involved in BJJ for years, not to mention my time on the mat, as a result my wife and I have a litany of friends from the BJJ community. The DeuS concept came from our discovery that many of them shared our faith and we began to brain storm how we could connect people on the mat to do things off the mat. What drives me is I want to be that person who leads by example and encourages like-minded people to combine forces, so we can strive to make significant positive change in our homes, communities and the world at large.

Has this venture changed you?
GVH: In a word, YES! I had to evaluate myself I would say before I was kind of a stand on the side line type of Christian. I would do a few things, volunteer here and there, but not be fully committed. Now I think about things from a different perspective. I also have a clear realization how easy it is to compromise your integrity with the things going on in the world, so you have to be more aware of walking the walk and talking the talk. It has heightened my awareness of my Christian walk and I make it a point to instil those virtues into my kids.

What have been some challenges you have faced?
GVH: I have had many challenges, those that were expected and those that I did not see coming…but, I am still here and my faith and passion has grown stronger as a result. That is pretty much all the voice I will give to negativity, I’d rather discuss how DeuS is moving forward, full steam ahead.

What sports are you focusing on and do you plan on expanding into other sports?
GVH: The current focus is BJJ, MMA and Boxing, once we are firmly established in those sports we will potentially consider others.

Do you have a sponsorship program for athletes?
GVH: Yes, I do and this is an entity that I am excited to grow. The GET SPONSORED link is on the website that has all the information: www.Deusfight.com

Would you mind sharing some of your testimony?
GVH: I would love to and I am going to in conjunction with the release or our Testimony Gi series, which we plan on releasing in by the end of this year (2015). Those who are interested in investing in the special edition gi will be able to go to our site and submit their testimony in order to get one, as well as see my humble testimony.

Is there anything else you care to share that we may not have covered?
GVH: I just want to thank my family, friends and all of those who currently support and who will potentially support what we are doing at DeuS Fight Company. We are just getting started!

Daily Rickson Interview Series 1 of 24: What is the Jiu-Jitsu Global Federation?