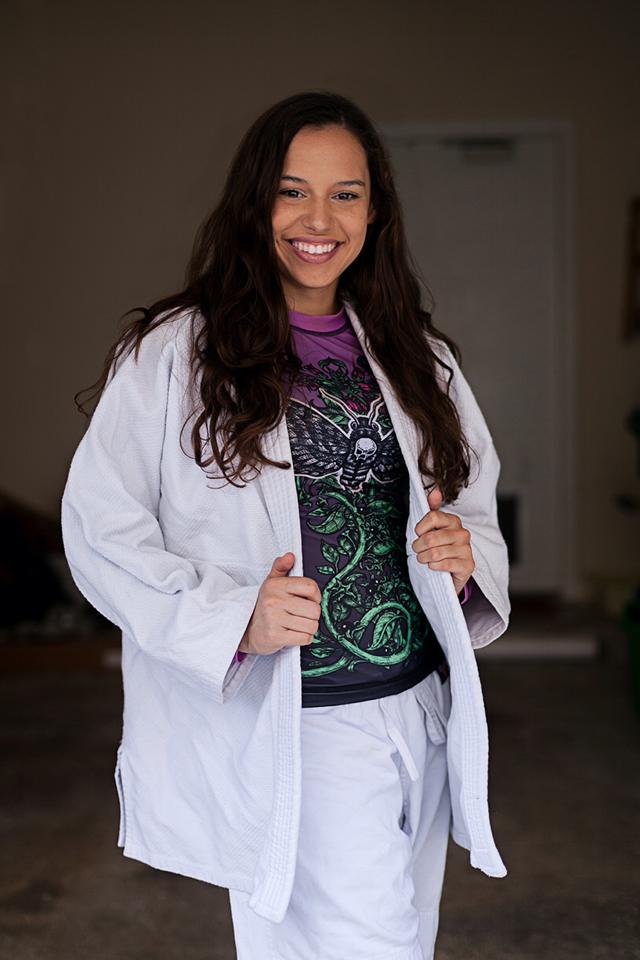 “Sometimes the past is something you just can’t let go of.

And sometimes the past is something we’ll do anything to forget.

we know about the present.”

One way or another, we have all been violated by someone in our lives.  Someone has taken advantage of us, lied to us, stolen from us.  Those things have happened to the best of us and for, the worst part was not the action but the person that performed it.  One violation that no one should ever endure is one of the body.  It takes away everything a person holds dear and often one is unable to recover from it.  Rachel Sanchez (Team Tooke, North Houston) has unfortunately endured such a violation.  Through BJJ she has come through her experience stronger than even she could have imagined with unwavering support from her teammates.  Sanchez’s journey began two years ago when she was in search of self-defense classes and begin training with the lure of a free trial.

Her initial start was unbelievably rocky.  The larger male drill partners’ smash and pass routine will NEVER sit too well with a trauma victim.  She often suffered panic attacks from pushing away teammates vs being able to use the drilling techniques taught to assist her with transitions.  Sanchez’s comfort zone was with male non-threatening teens as partners or other women.  They were her size and her weight.  A person that has been through a traumatic experience typically avoids anything that reminds them of it like the plague.  The senses are also the sensors or alarms that trick the brain into believing you are in clear and present danger when in fact the danger is your own memories.  Memories have a way of being both a blessing and a curse for a trauma victim and at any given moment those memories can terrorize them in a way that is crippling.

Sanchez has been one of the lucky ones.  She makes it clear that even when she has felt triggered that BJJ has been her saving grace and she is nothing but thankful.  “Because of my PTSD and how common my particular triggers are I am a very high strung person. When I’m training my energy and anxiety levels mellow out to levels I can actually relax and be calm with. When I do get triggered, practice will always work the tension right out of me.  I was injured for three months recently and unable to train.  It was really hard.  My emotions were a roller coaster but I managed to make it to every class and my Professor Travis Tooke (Team Tooke) was amazing about keeping me actively involved with the class.  I was still able to contribute to my team. I would not have come out of that injury as well and as stable as I did if it weren’t for my coaches and teammates.”

Sanchez has had some wonderful support from her team and that is an absolute blessing.  Tournaments are a time in which she is truly tested and in need of that support.  Every trigger she has is pinged.  The best part is she has support through each and every obstacle, the worst part is her hurdles are less like taking fire from a 22 and more like receiving a non-stop barrage from an M-16 on burst.  To turn down advance after advance leaves one in a fragile state when she still has to compete.  At times like that her character is truly tested and the lady really shines, simply because she stays the course.

Sanchez has emerged from her trauma battered but not broken.  The anger and rage she felt post trauma has been channeled in a positive manner.  A girl that was once a blazing ball of fire has been reduced to smoldering embers.  BJJ put out the blaze.  That’s not to say that she doesn’t have moments of anger.  That’s not to say that Sanchez never gets triggered.  However, her responses now vs her responses post trauma are like night and day.  The four-points method her team developed and uses with her has had phenomenal results. This is when a coach or teammate knows she is struggling and approaches, places their hand on her shoulder to let her know they have her back.  This team supports their teammate through thick and thin.  For a sport where a women may be apprehensive to start because of the male dominated culture this is enough to let all know, things are rapidly changing in BJJ and they are changing for the better.

“Violators cannot live with the truth: survivors cannot live without it. There are those who still, once again, are poised to invalidate and deny us. If we don’t assert our truth, it may again be relegated to fantasy. But the truth won’t go away. It will keep surfacing until it is recognized. Truth will outlast any campaigns mounted against it, no matter how mighty, clever, or long. It is invincible. It’s only a matter of which generation is willing to face it and, in so doing, protect future generations from ritual abuse.”
― Chrystine Oksana