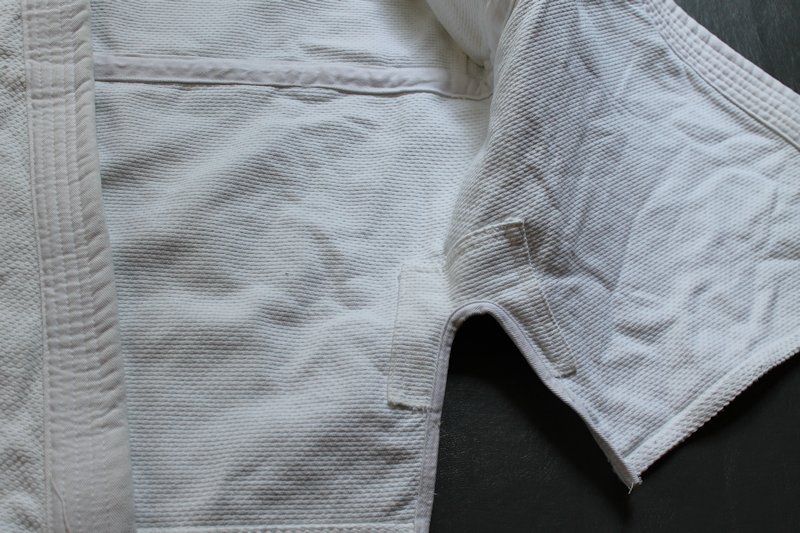 “At the moment of exhaustion, inspire yourself to take on last step and that is when you have reached the next level.

In Korean folktales, dokebi is a mythical being.  Dokebi is considered to be harmless but nevertheless mischievous, playing pranks on people or challenging wayward travelers to a grappling match for the right to pass.  The Dokebi’s free-spirited attitude reflects what we believe is the essence of the BJJ lifestyle.”    Dokebi Bros

The Balance is Dokebi’s first in a line of BJJ gis that are made in Korea.  This is the first Korean made gi that I’ve been able to review and to my knowledge one of the very few Korean made BJJ gis on the market.

Design/Features/Construction:
The Balance harkens back to the earlier days of gi manufacturing.  The jacket is 450g single weave with matching heavy twill cotton pants.  The seams of the jacket are triple stitched and covered with cotton tape on the interior for additional comfort.  Armpit and skirt reinforcements have also been added.  The collar has the heaviness that you’d expect in a non-foam filled lapel.  The pants have an offset waist so that they’ll stay up better and the waist is kept in place with a flat drawstring and two loops.  The stitching and seams of both the pants and jacket are tight, even and sturdy.  However, there is consistent over-stitching throughout the gi.  The structural integrity of the seams do not appear to have been affected by the over-stitching.  If someone where to spend about 5 minutes with a pair a small scissors this could easily be prevented.

Jacket:
The single weave jacket has minimal adornment and will appeal to your sense of tradition.  The single weave is soft, supple and breathable.  As someone who typically wears pearl weave I can tell you that you won’t find any of the scratchiness and stiffness you may be used to with other weaves.

The only decoration you’ll find on the jacket is three pieces of embroidery.  On the left chest/lapel the Dokebi Bros logo and name have been embroidered, ~11” x 3”, in grey and light blue.  “Dokebi Bros” is also embroidered on the right shoulder in light blue letters, ~9’ x 1.5”.  The final piece is on the back of the gi near the neck, a stylized blue and white Yin Yang with horns, ~3” diameter.  The embroidery is well-done throughout and looks very crisp.  The color scheme and designs are well-executed.

Pants:
The pants of the Balance gi pretty much what I think of when I think old-school BJJ pants.  The cotton twill is heavy and pretty much indestructible.  A few “modern” features have been added, such as knee reinforcements that go all the way to the cuff and an offset waist.  Unfortunately, the flat drawstring and two belt loops are a bit too old-school for me and I wish there had been a cord and 2 more loops.

There are two pieces of embroidery on the pants.  The first is on the outer right thigh, a manufacturer’s logo, ~2” x 2.75”.  The second piece is on the lower left leg, 6” x 2.5”, and consists of Korean hanja.  As with the jacket the embroidery is very well done and looks great.

Test Run:
I had one of my training partners help me with testing (6’1″ and 200lb) because the A3 fit him very well.  These are his impressions:

“The overall look of the Balance by Dokebi is impressive. The color and style of the high quality graphics that are securely stitched into the gi fabric look match the white back ground extremely well. I also like how there is a graphic on the bottom of the left leg. I think logos and patches on towards the cuff of the foot are more visible than a patch or graphic on the hips.

The feel of the gi is customary to single weave gi fabric, although it is a slightly heavier gi. Not heavy when compared to other gi’s made out of the same fabric (Fuji); however, heavier than a light-weight gi or a gi made of rip stop fabric (Atama). The fabric does not stretch too bad after a hard rolling session, but its weight does increase as you sweat.”

Special Considerations:
There a few things that made Dokebi standout.  The first is that it’s made in Korea.  I’ve never even seen another Korean made gi.  I know that there’s at least one more Korean based manufacturer but as I said I’ve never seen a single one of their gis.  The other is the retro design and feel of the gi.  The gi would be right at home in a 50 year old picture of GM Carlson training.

Wrap Up:
There are definitely a lot people out there that aren’t huge fans of the newer breed of BJJ gis.  Lots of patches, embroidery, contrast stitching and so on may run counter to your personal sense of BJJ style.  If you’re looking for something reminiscent of the gis worn in the old black and white Gracie videos this gi fits the bill.  The gi is €129.00 (~$165) and goes on sale July 12th.  I do wish that there were two more belt loops, a cord belt and that the overstitching had been trimmed better.  That being said the Balance is a solid gi, with one of the coolest mascots I’ve ever seen and is sure to last.

In the words of our tester:
“For $165.00 dollars it is a very good gi for the money, especially if you are a fan of heavier gi’s. The Balance is a durable gi that any beginner would fine comfortable and a gi in which any expert would feel at home.”