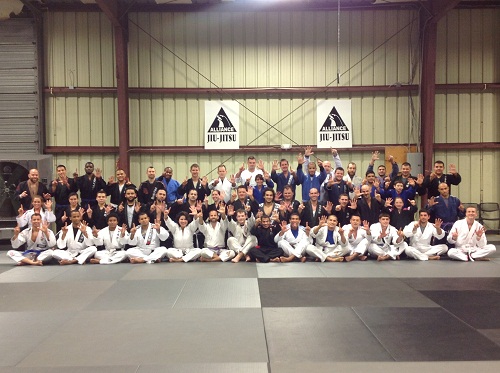 A few weeks ago I was in Orlando and was fortunate enough to have a little free time to train.  It didn’t take me long to realize that Bruno Malfacine had a school in the area and I immediately knew where I wanted to go.  I hope that most of you have seen some of his highlights but if you haven’t do yourself a favor and check them out.  Bruno has a highly energetic and aggressive style that can best be described as a whirling dervish of passes, sweeps and submission attempts.

The facility itself is new, clean and huge.  With 1,300 square feet of mat space everyone had ample room for training and conditioning.  The facility has a full sized MMA cage and boxing ring.  They’re fully equipped strength & conditioning area that would put many Crossfit gyms to shame and had all the toys and equipment that you’d expect to find at a top-notch facility.  There are locker rooms for men and women.  The lockers have showers, bathrooms and a changing area with lockers.  All in all it’s a great set up.

The fundamentals class was about an hour long and after a 15 minute warm-up we worked standing to open the guard and then two passes once you’ve stood up.  As we worked the techniques Bruno and two of his assistants (brown and purple belt) walked around to give pointers to the students.  Bruno also spent about 20 minutes with a student who had just signed up.  The remainder of the class was spent drilling the techniques.  I found it interesting (and refreshing) to see so many people at a fundamentals class.  There were close to 60 of us in the class.  This included about half a dozen women and a pair of tweens.  The ages range from early teens to forties and half the class was a blue belt or above.

Bruno and Brad Thompson (owner & 2nd degree BB under Carlos Gracie, Jr) were fantastic hosts and invited me to come back the following night to watch the competition class.  I don’t want to go into too much detail but for the next 2 hours I saw 30 guys and gals working very hard on their technical jiu jitsu skills while preparing for this years competition season.

Wrapping It Up
I had a great time at Alliance Orlando and hope to be able to visit there anytime that I’m the area.  If you live there I’d definitely recommend giving it a shot.  For those just starting out the fundamentals classes are great to begin your instruction into the art BJJ and if you’re a seasoned jiu-jiteiro the competition and advanced classes will provide you with plenty of challenges.

Thanks again to Bruno Malfacine, Brad Thompson and the students of Alliance Orlando for their hospitalilty!