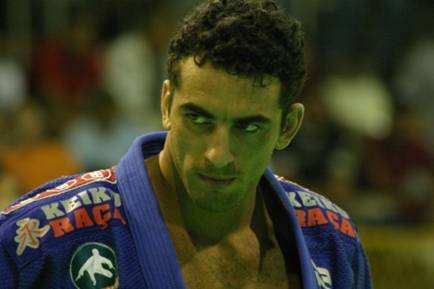 The World Famous and Internationally Renown BJJ Legends Magazine and DVD (of BJJ Moves) will interview ADCC Champion from 2009.

Estima is considered one of the world’s best grapplers. The head instructor and owner of the Gracie Barra Brazilian Jiu-Jitsu Academy in Birmingham, England, Estima is a black belt who currently trains under Renzo Gracie. His submission competition achievements include winning the CBJJ World Championship in 2004, 2006, and 2009, the Absolute World Cup Championship in 2006, the European CBJJ Absolute Championships in 2006 and 2009, as well as being the ADCC 2007 silver medalist. At ADCC 2009, Estima won both the under-88 kg and Absolute division championships, defeating DREAM veteran Andre Galvao and Sengoku veteran Xande Ribeiro in the respective finals.

The 6’3”, 190 lb. native of Brazil shocked the grappling community by submitting Marcelo Garcia, in addition to defeating Galvao and Ribiero on his way to the under-88 kg and Absolute division championships. Estima is a multiple-time World, European and Pan-American grappling champion.

“We’re excited that this blockbuster talent has decided to share his knowledge with the world,” says Tom Shaw General Manager for Legends Multimedia (publisher and owner of BJJ Legends Media properties) “It’s about bringing the sport and martial arts to a higher level through the world, spreading the knowledge spirit, sportsmanship has a positive influence on people, children and communities that extend through the people in the sport.”.

BJJ Legends Magazine (www.BJJLegends.com) is published by Legends Multimedia (www.LegendsMultimedia.com). BJJ Legends is Jiu-Jitsu and Submission Grappling magazine that includes interviews from Legends of the art like: Royce Gracie, BJ Penn (UFC Champion), Leo Veiera, Kyra Gracie, Royler Gracie, Marcio Feitosa (of Gracie Barra).  25 or more Techniques and Submissions are included in print and on a DVD with the magazine.  The publication is distributed internationally.  The magazine can be purchased in the US at Barnes and Noble, Borders and other stores – or through Amazon or www.BJJLegends.com/store.

Contact BJJ Legends or Legends Multimedia at: 888.534.3633 or at media(at)bjjlegends.com