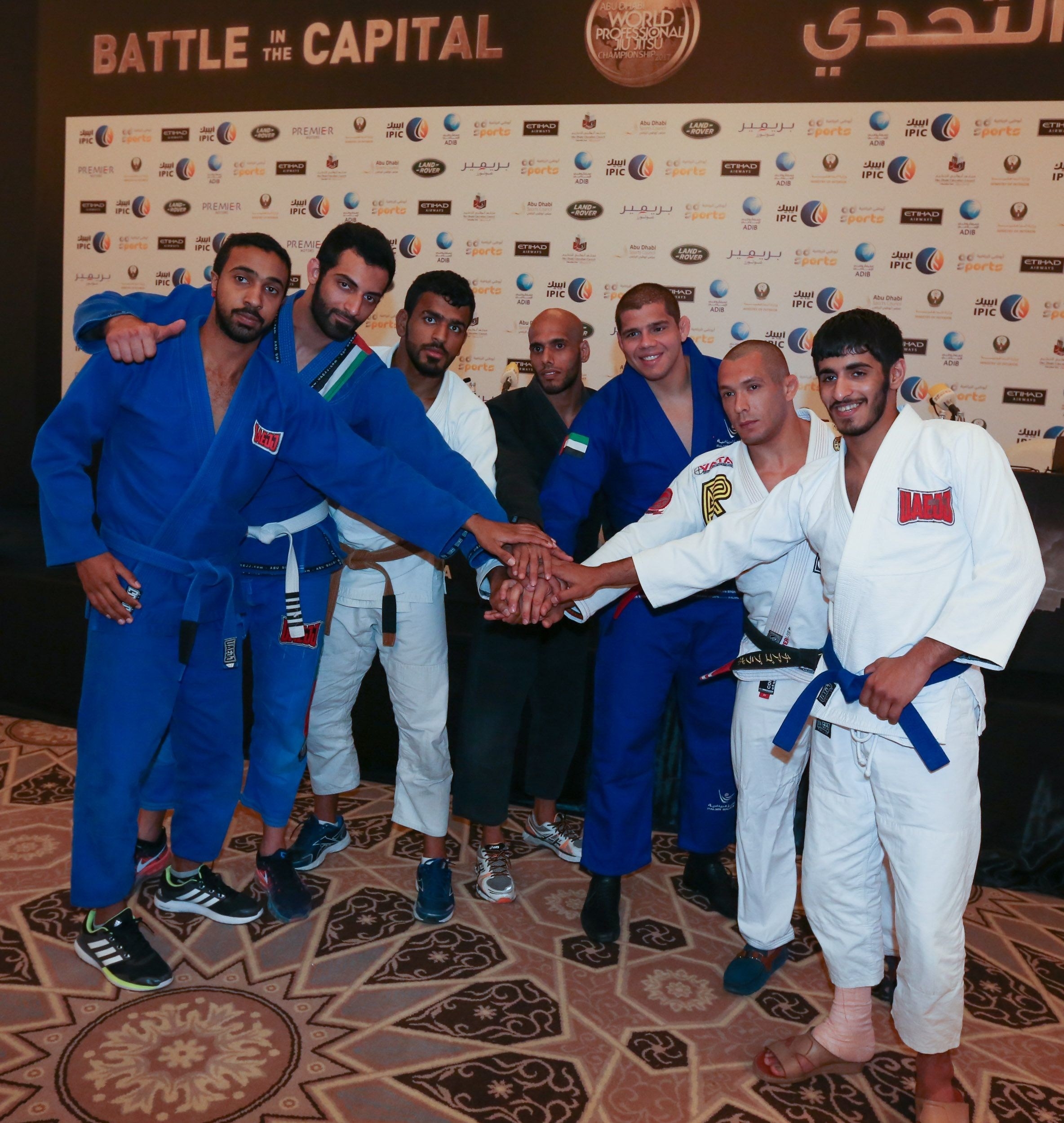 The final countdown is on to the Abu Dhabi World Professional Jiu-Jitsu Championship, held under the patronage of His Highness Sheikh Mohamed Bin Zayed Al Nahyan, Crown Prince of Abu Dhabi and Deputy Supreme Commander of the UAE Armed Forces, and taking place from 10th to 23rd April at IPIC Arena, Zayed Sports City.

With just one week to go to launch of the world-class event, a slew of international players have arrived in the capital to battle it out on the mats for world titles. Athletes including Jose Junior, Tiago Bravo and Mackenzie Dern known as the best Brazilian Jiu-Jitsu fighters in the world will be a highlight of this year’s event.

Today Jose Junior and Tiago Bravo appeared in front of local and international media, dignitaries, special guests and sponsors at a press conference alongside the UAE Jiu-Jitsu Federation and UAE Jiu-Jitsu National Team, to give a taste of the excitement to come.

Additionally, the local heroes of the UAE Jiu-Jitsu Team were unveiled today including; Yahya Alhamadi, Mohamed Alqubaisi, Dhahi Althumairi, Zayed Almansoori, Faisal Alkitbi, Taleb Alkirbi and Ibraheem Alhosani. The team who are fresh out of training, expressed their enthusiasm at representing their country on the world stage and their hopes for this year’s event.

The Championship promises to be the most dynamic to date as the competition continues to grow 44% year-on-year. The 2017 edition will welcome over 7,000 international and local competitors from over 100 countries across youth, professional, Para-athletes and legends divisions, battling it out for a prize fund of up to AED 3million.

Additionally, brand-new to this year’s event is key emphasis on social responsibility as part of the UAE’s ‘Year of Giving’, which will see an introduced Para-Jiu-Jitsu division open to players with physical disabilities and special needs. Additionally, there will be a number of community workshops and lectures each day around topics such as culture, nutrition as well as health and fitness.

For the family, there will be a breadth of activities in the largest ever IPIC Fan Zone, including sponsor activities, interactive stands, plus the annual raffle returns, giving the public a chance to win exciting prizes, including two-brand new cars from Premier Motors that include Jaguar XE and Land Rover Discovery Sport. As part of the Fan Zone, Etihad Airways will also be giving away 10 flight tickets away to Jiu-Jitsu supporters.

The tournament will kick-off with the Abu Dhabi Jiu-Jitsu Festival on Monday 10th April and with a new extended 6-day program to Saturday 15th April. The festival is an opportunity for members of the UAE Jiu-Jitsu Federation and loyalty card-holders under the age of 18, plus white belts and those with disabilities and special needs, to compete in a world professional environment against their peers.

The Abu Dhabi World Youth Jiu-Jitsu Championship takes place on 16th & 17th April. This is where the next generation of professional players take their learnings including the fundamental values of Jiu-Jitsu and will compete in the state-of-the-art arena to add points to their 2016-2017 season.

The professional Jiu-Jitsu contest will take place from Tuesday 18th to Saturday 22nd April and will see head-to-head fights with international participants from USA, Brazil, Australia, Japan, Korea, Poland and more, for a gold, silver and bronze medals.

One of the highlights at this year’s event is the ultimate clash of Jiu-Jitsu talent in the Abu Dhabi World Jiu-Jitsu Legends competition on Saturday 22nd April. Ten world-renowned contenders including Kenny Florian (USA), Wellington “Megaton” Dias (USA) and Vitor “Shaolin” Ribeiro (BRA) will show off their grapple and takedown skills across Bantamweight, Lightweight, Welterweight, Middleweight and Heavyweight divisions.

Abu Dhabi World Jiu-Jitsu Awards, to be held on Sunday, April 23rd at the Emirates Palace Hotel in Abu Dhabi. The awards ceremony will be a celebration of tournament winners and will recognise both players and entities for exceptional talent within the following categories for 2016/2017:

Headline sponsor IPIC’s Hamad Ali Al Ahbabi, Acting Business Support Director, said: “We are proud of our sponsorship of the Abu Dhabi World Professional Jiu-Jitsu Championship and pleased with IPIC’s link to this extraordinary sport, that has been very successful year after year owing to the boundless support of the leadership as well as the concerted efforts of all official and sports entities in Abu Dhabi. We are also keen on taking the necessary support in order to host this championship successfully, and in accordance to the highest standards so as to highlight the bright culture of the capital to our visitors, and to showcase our close link to the community through the support of similar events.”

Mr Fouad Darwish, General Manager of Palms Sports, said: “At Palms Sports we are as proud as much as we are honoured to be part of the unprecedented movement that was initiated by our visionary leaders to weave sports in the fabric of the society. Working alongside our key and strategic partners, we strive to deliver the best Jiu-Jitsu training programmes at the highest world standards in the education, public and private sectors. After all, improving the life quality and providing every means of wellbeing and a balanced lifestyle is our shared goal.”

Nawal Al Bayari, Head of CSR Council at Abu Dhabi Islamic Bank, said: “We are proud to support the Abu Dhabi World Professional Jiu-Jitsu Championship as part of our continuing efforts to promote opportunities for UAE citizens which can enable them to shine and excel in all areas of their lives. Jiu-Jitsu is truly a sport for everyone. It builds tremendous physical and mental capabilities while instilling many positive characteristics including courage, commitment and cooperation. As one of the leading banks in empowering the next generation, we are delighted to be sponsors of this world-class championship and wish all competitors the best of luck.”

Mohammad Al Bulooki, Executive Vice President Commercial at Etihad Airways, said: “As a proud sponsor of the Abu Dhabi World Professional Jiu-Jitsu Championship, Etihad Airways will provide its world-renowned Skytrax Certified 5-Star service to international participants from around its extensive route network, giving them the best possible start to the competition. The national airline of the UAE also realises the importance of the event as Abu Dhabi continues to establish itself as a major destination for sports.”

Premier Motors, official dealer for Land Rover vehicles in Abu Dhabi have been supporting the Abu Dhabi World Professional Jiu-Jitsu Championship since 2011. Helal Hanei Omar, Vice-President, Premier Motors, said: “The Abu Dhabi World Professional Jiu-Jitsu Championships (ADWPJJC) has established the UAE on the global Jiu-Jitsu map as a leading global player in this sport. The success enjoyed by the UAE Jiu-Jitsu team on the international stage is proof of the investments and efforts of the federation in making the game popular across the UAE. The Championships have played a major role in spurring the interest of the UAE youth in Jiu-Jitsu.”

The Abu Dhabi World Professional Jiu-Jitsu Championship will be an unequivocal celebration of the martial art across the country and outlines the region’s enthusiasm for the sport across all levels – from grassroots and community participation, to youth engagement, military use and professional sporting talent. The ninth edition promises to be an action-packed fortnight of competition and fun with something for everyone, from Jiu-Jitsu players, international fans, local followers and the general public alike.

The Championship is open to all and is free to attend across the two weeks. The competition will be broadcast on Abu Dhabi Sports Channels across the region, as well as live-streamed online and the official UAE Jiu-Jitsu Federation social media channels. To learn more about the event and keep up-to-date with the program visit https://www.uaejjf.com/.

IPIC is the International Petroleum Investment Company, formed by the Government of the Emirate of Abu Dhabi in 1984 to invest in the energy and related sectors across the globe. Today it manages a portfolio of investments in more than 18 leading companies across the hydrocarbon value chain, including exploration and production, shipping and pipelines, downstream retail and marketing, petrochemicals, power and utilities as well as industrial services. The company was created by The late HH Sheikh Zayed Bin Sultan Al-Nahyan, founder and first President of the United Arab Emirates, to advance his vision of using Abu Dhabi’s natural petroleum wealth to build a modern, diversified economy for the benefit of future generations.

Epic 80 Minute Match and Then Some

Berimbolo Sweep: How To Use It In Your Game