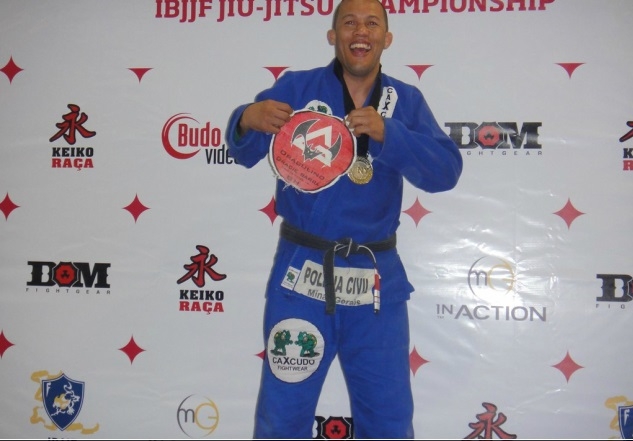 “Terrinha is one of my most accomplished students in competition. He has won the Pan Ams 15 times and the World’s Masters 3 times, besides others gi and no-gi titles. His experience as a competitor has made him a very good teacher and coach. He has a very intelligent way to adapt and modify techniques to be better suited for his students. I’m very lucky to have him as a student and friend.”

Carlos Terrinha was born in in 1969 to a low income family, the 10th child with 11 brothers and sisters in the city of Belo Horizonte, Minas Gerais, Brasil.

In 2003 Carlos moved to the USA and became a resident of Hopedale Massachusetts. He teaches BJJ at Gold’s Gym in Milford, adults 6 times a week, kids 2 times a week.

Passionate about the Martial Arts, he not only teaches BJJ but also plays a little at Judo, has dabbled in Capoeira and American boxing and has trained 8 years of traditional Jiu Jitsu from professor Juse Adilson Ferreira, his master was Takeyo Yano. For 12 years Carlos worked as a Civil Police Detective for the state of Minas Gerais.

Terrinha worked his whole life to find a way to pay for his classes to learn Jiu Jitsu, travel and compete. This champion began to train Jiu Jitsu 1989 when he was 19 years old with professor Jose Adilso.

He started competing as a white belt and never stopped. He was 3 time State champion in Minas Gerais , 3 time Brazil National champion and 2 time World Champion.

In 1998 Terrinha had a chance to meet Vinicus “Draculino” Magalhaes from Gracie Barra BJJ. Professor Draculino had moved from Rio de Janeiro to Belo Horizonte around 1986, Terrinha started to train with him and his students at Gracie Barra Belo Horizonte. and it changed Terrinha’s life.

“Training with Draculino changed my Jiu-jitsu because I had the chance to see a new style of Jiu-jitsu of Gracie Jiu Jitsu and I had the opportunity train with a great competitors from his team, students who want to be a champions. Those guys do not play for fun any time and it changed my way to see Jiu-jitsu.”

With so many compitions under his belt Terrinha has his share of bad calls. In 2005 finals the referee simply raised the wrong hand.

Terrinha says to anybody who wants to do sport, “You do not need to be a champion but you should train with a champion because they test the technique at the competition that they teach their students.”

Carlos would like to thank his kids Ana Carolina and Carlos Eduardo, his girlfriend Pollyana Carbone, Professor Vinicius “Draculino” Magalhaes, the Gracie Barra team and his students for always pushing the level higher. A very special thanks to his boss and sponsor Jose Farah Jr.

Come to be part of this lifestyle and if you have never participated in Jiu Jitsu, come to try a class and get to know it and see for yourself how it will change your life. http://tdtbjj.com/