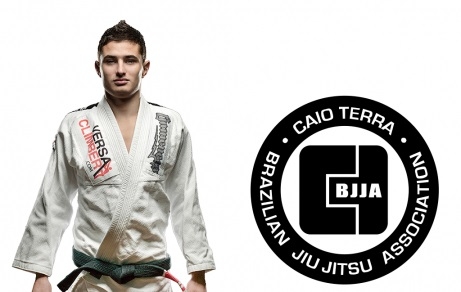 Take a minute to read about one of the most controversial figures in BJJ, Caio Terra.  Just like Frank Sinatra, he has carved an extraordinarily unique path by doing things his way.

Caio Terra’s standing denotes him as one of the most prolific rooster weight grapplers in BJJ. Terra, (unlike many of his lightweight counterparts) competes in absolute divisions and has noteworthy victories against black belts twice his size in Gi and No Gi competitions. He is known for his sweeps and back takes (more than most lightweight grapplers) as well as, for his triangle, armbar, and omoplata attacks from the bottom.  Terra is one of the best in the game today for a plethora of reasons and his half-guard game is undeniable and studied by the masses. BJJLegends sits with Terra to talk about his success and why being a professor has become the most important thing to him.

As a kid growing up, Caio Terra was led to the sport of BJJ by his mother as a method of self defense that has led to a life long passion.  In 2015 the Caio Terra Association had a very prominent year.  8 top male No Gi Grapplers competed for $17,500 in prize money at 5 Super League August 2, 2015.  Yuri Simoes of Caio Terra Association was one of the competitors.

Kaniela Kahanui is the talented Cal State East Bay linebacker that also dominates in BJJ, he is one to continue to watch.  Terra’s gym has a growing list of talent to look for in the coming years in Paulo Gabriel, Ryan Walsh, Rudson Mateus, Benjamin Silva, etc.  When it comes to grappling Gi or No Gi, it is a point of preference in and BJJ.  “Grappling” describes techniques that use holds and leverage, such as clinches, escapes, pins controlling skills, sweeps, submission holds, reversals, takedowns, throws and turnovers.  Terra has proven time and time again that skill not size is the most important thing when it comes to grappling and he is a consistent performer in open divisions in both Gi and No Gi competitions.

“Blessed is he who has learned to admire but not envy, to follow but not imitate, to praise but not flatter, and to lead but not manipulate.”-William Arthur Ward.  Over the last 5 years the evolution of Terra’s game is part of a natural order.  Terra believes the more you know about Jiu-Jitsu, the more ideas you will have to create with and the more you will continue to adapt.  Training and attending classes is how you consistently improve according to Terra, competition helps you feel a different experience and deal with scenarios and emotions you won’t get to experience in a gym setting.  Technique is key, “without good technique you can only go so far, you will never reach your full potential, and that goes for everything you do in life.  However, if you are happy with what you do, there is never a plateau.”

Terra is well known for teaching and competing in the BJJ world.  He also is also a philanthropist, the Godfather of a social project in Brazil, Leoes de Juda. Founded on April 24, 2009 by Thiago Dias (head of Caio Terra Association Brazil) and Fernando Halfeld, Leoes de Juda is located in Juiz de Fora. Through Jiu Jitsu it is their hope to instill discipline, ethics, respect and a love for their communities. Integrating sport with religion, it is their mission to help the youth deal with daily problems they face such as violence and drugs. To participate in the youth project, the students must be properly enrolled in school and make good grades. More important than how they behave on the mats is how they behave off.  http://www.ctbjja.com/leoes-de-juda/

Injuries of any kind are a challenge for a consistent competitor.  Delays in training and training setbacks detract from a routine, and when you are the Professor the pressure to be present for your students can be overwhelming. Terra suffers from chronic headaches/migraines, instructing under those circumstances would be impractical.  “Training with a headache is never as fun, but my biggest problem is that when I do so I start having vertigo and it’s impossible to train or do anything with vertigo. I started having them in the end of 2013 and nowadays I can control it better, unfortunately I have to stop training immediately so my symptoms don’t get worse.”

The issue of equal pay became a very hot topic in BJJ and more people seem to have an actual opinion on it.  Well Terra thinks the issue is less about equal and about getting paid period.  The thought that one can live off only training and tournment money in his opinion is not realistic and not a good retirment plan.  So the question is now should people be talking about equal pay or a 401K?  If you are training and traveling and you really think of how a 9 to 5 works Terra has a point, how much are you worth?  You are doing what you love but people that do what they love still get reasonable benefits including healthcare and a retirement plan.

The Caio Terra Association is successful and Terra has created a very close knit organization where he can remain connected to his people.   “Jiu-jitsu was very hard for me, I was too small and things never went my way when I first started.  There is nothing good about being a bad loser. So my greatest achievement is that I persisted through hard times and didn’t quit BJJ.  I want to create a really good gym, not just BJJ wise but with only good people in it, where everyday I’m happy to go to work.”

As the new year begins many already have set goals in mind and it is easy to get tunnel vision.  Hopefully, people are looking toward a bigger picture and no matter how things pan out in a season, the journey will get you to where you ultimately want to be. Caio Terra is making sure that his ultimate goal is realized, “going into 2015 No Gi Worlds from the outside everything looked the same but for me it was completely different.  As we were training I looked at our team and saw in their eyes the same dreams I had when I was younger, to be a champion. 2015 was a defining year in my life, I realized that although I like to compete I like coaching more, because I love our team.”