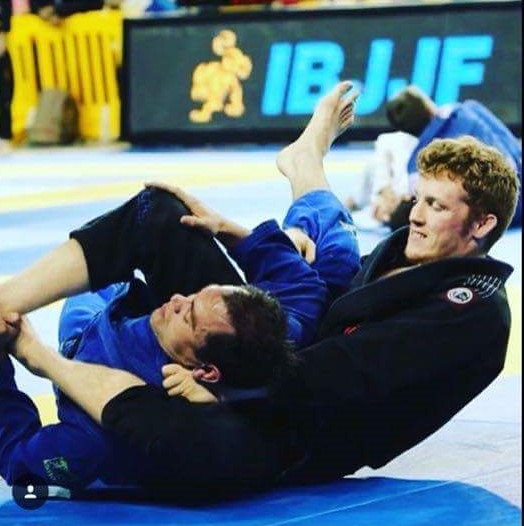 Come, read about Tanner Rice of Rice Brothers BJJ the youngest American to acheive his blackbelt from Rubens “Cobrinha” Charles at 19.

Success is determined not by whether or not you face obstacles, but by your reaction to them. And if you look at these obstacles as a containing fence, they become your excuse for failure. If you look at them as a hurdle, each one strengthens you for the next. – Ben Carson

At 15 years old Tanner Rice had a huge responsibility.  He was running the kids program at is family’s gym.  Shakespeare recaptured the words of Henry the IV with the quote, “Deny it to a king? Then happy low, lie down!/Uneasy lies the head that wears a crown.”  Some are born to be great and others have it thrust upon them.  At the age of 19 Tanner Rice became the youngest and first American born black belt promoted by Charles “Cobrinha” Maciel (Alliance).  At such a young age, when things are thrust upon him, Rice seems to handle them with aplomb.   BJJ Legends talks to Professor Tanner Rice about some of his greatest matchups, the effectiveness of performance enhancement testing, and his thoughts on well-rounded practitioners.

BJJL:  You are very young, have accomplished a great deal, and have a prestigious lineage.  From the day you started training at 6 until now, what led you down this path?

TR:  At a younger age my father (Rod Rice) started training me and my brothers, it was hard to begin with because it wasn’t like it is now where we had a lot of training partners.  All I had was my older brothers and my dad at the time and having older brothers to train with there is never any mercy when it comes to rolling so I got smashed on a lot. Getting smashed also became discouraging and I didn’t believe that Jiu-Jitsu was for me, but my dad kept telling me to proceed and push through the hard times so I owe it to him for who I am today.

BJJL:  Tanquinho Mendes and Megaton Dias, two monumental wins for you at 19.  Both seasoned, highly regarded, what were your thoughts pre and post match-ups?

TR:  I had just got my black belt when I was about to fight Augusto Mendes and I had just watched him fight 2 months prior at the U.S Open and he won his division and open weight and before that I was always fond of his amazing base on top so when I found out I was fighting Tanquinho Mendes I’m not going to lie, I was freaking out!  He  had just beaten my past professor Cobrinha and at the time Cobrinha was still murdering me in training, so that added to the nerves a little bit but once I got out there and started fighting the nerves went away and I fought pretty well.  Afterwards I was in disbelief that I did as well as I did.

BJJL:  Because of your father (Rod Rice) is BJJ the family business?

TR:  When I turned 15 my father opened a gym and I began teaching kids and he taught the adults.

BJJL:  You spent 1yr in Brazil when you were 16, what was that experience like?

TR:  I went to Brazil with a friend Carlos Diego Ferreira and stayed at his house and began training at the school he trained at his whole life Club Pina, the experience was amazing.  I had to grow up quickly! I had never been away from my dad more then a week so it was hard but I enjoyed the hard training and the culture.

BJJL:  What do you think constitutes a well-rounded practitioner to be and do you exhibit those characteristics?

TR: I envy Leandro Lo’s game the most out of everyone, but I think Rodolfo Vieira  and Lucas Lepri have the all around best Jiu-Jitsu in the world.  I think to be great in Jiu-jitsu  you have to be able to understand the game and make your own game whether it be on top or bottom.  I think I have a lot to learn and figure out still and always will.

TR:  Black Belt will always be the most challenging rank for anyone that has reached the black belt level and competed.

BJJL:  Would you like BJJ to go back to it’s origins no time limit, submission only?

TR: I like both styles of competition submission only and points/submission.

BJJL:  How does all the traveling impact you mentally/physically?  How do you stay focused when you can’t be with your family during those important life events and vice versa?  They can’t follow you around the world?

TR:  Traveling to compete takes its toll if you aren’t used to it but the more you do it the more you create a sleep/eating regimen for yourself that doesn’t make it as bad. I actually like competing on my own without my team or family around I feel like I stay more focused and more relaxed. Sometimes having my team/family around gives me anxiety it’s gotten better over the years but sometimes I feel like it still alters my performance.

BJJL: Steroids/performance enhancement abuse and the repercussions are discussed more in traditional sports to include wrestling.  What are your thoughts on how it is handled in the BJJ realm or the IBJJF’s policies and procedures on the subject matter?

TR:  I think IBJJF testing for steroids is great but I think they should test the athletes at more events instead of just worlds. There are too  many ways to cycle on and off without getting caught. Year round testing would be great for the athletes and for Jiu-Jitsu  itself to grow as more of a known sport around the world.

TR:  I train/ workout for 3 hours in the morning and 2 hours at night.  When a competition is coming up I just bring up the intensity of my training and try to push harder then the day before no matter what.

BJJL:  Would you and your brothers consider starting a career in MMA fighter?

TR:  MMA has never been my thing nor my brothers so you’ll see us on the BJJ scene for years to come.

TR:  My proudest thing I’ve taken from Jiu-Jitsu is our kids program. We have a lot of great kids that work their butts off everyday and they win a lot of competitions. You will soon see them start to shake up the juvenile divisions very soon.

TR:  I think either Leandro Lo vs Rafael Mendes or Rafael Mendes vs Lucas Lepri would be amazing to watch because of the clash of styles.

BJJL:  Kid’s Pans is less than a month away, does your gym have any contenders?

TR:  My plan for this year is to win as much as I can. I’m really focused on training and competing right now. I’m always down for seminars but I need to focus on my goals mainly.

Professor Tanner Rice made history as an American practitioner at the tender age of 19.  A chain of events began many years ago that set him on his current path.  Rice still has plenty left to show us but one can’t help but wonder after all that Rice has done (and he hasn’t even reached his prime), who will Rice Brothers BJJ unleash on the scene next?

Your friends will believe in your potential, your enemies will make you live up to it.-Tim Fargo