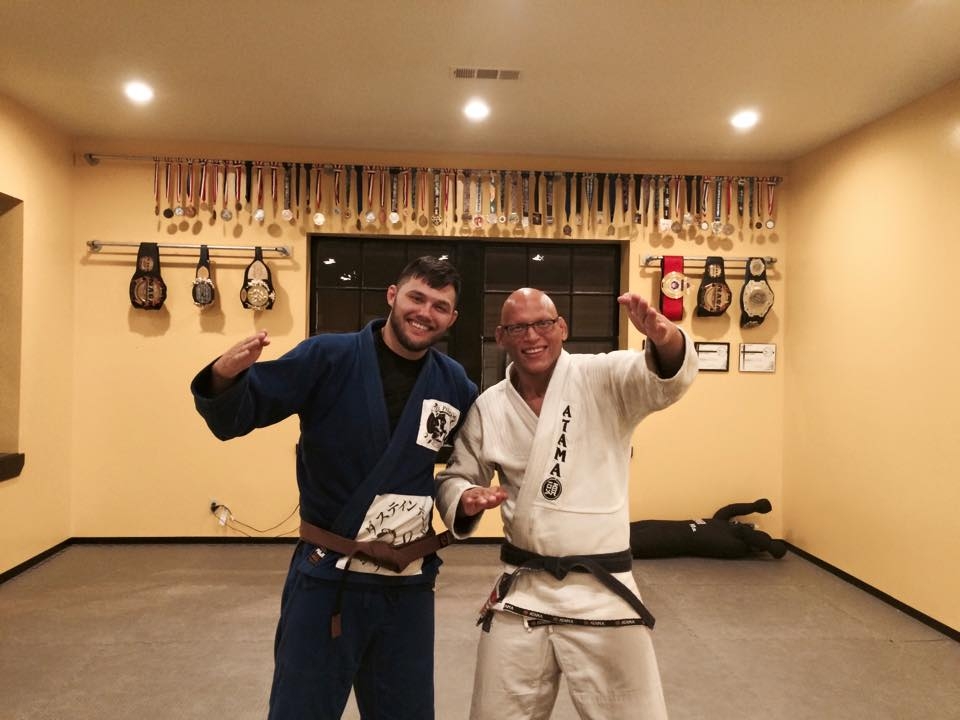 After two over doses, the last one landing him in a coma Devin Chasten started BJJ in earnest. After a broken neck and spine surgery in 2011 Devin received his brown belt this October from Dustin “Clean” Dense. Read the rest of the interview.

Success through hard work is the merit that defines a champion both on and off the mat. Yet being a champion doesn’t come easy as it takes struggle and the will to work to reach one’s goals. October 1st 2015 marked a monumental day for grappling practitioner Devin “Pirata” Chasten of Kansas City, Mo with his promotion to BJJ brown belt under world renowned Dustin “Clean” Dense. This pivotal achievement wasn’t accomplished overnight as Chasten’s rollercoaster nine year journey showcases the results of never giving up and always striving to become better. Devin openly touches on in this exclusive interview with us at BJJ Legends.

Your instructor Dustin “Clean” Denes visited your gym Bodyfit KC to do a seminar on October 1st. In addition he surprised you with a well-deserved promotion to BJJ brown belt. Would you care to touch on your thoughts and feelings about getting promoted that night?

Devin Chasten: It was an incredible feeling with a lot of emotion behind it for sure.   He gave a long speech before the promotion at the end of the seminar, touching on a lot of things about our relationship, the beginning of our training together, so on and so forth.  It was an incredible speech that left me almost tearing up to hear how he felt about me and about this promotion, a moment I will never forget.

Achieving this feat was by no means an easy task. Reflecting on your journey when you think of the word “struggle” why is it a good thing?

DC: Struggle is a great thing in hindsight; it is an opportunity to grow.  Without a struggle to overcome, you can’t get better.  That’s how I looked at it, and believe me I had my fair share of struggles, just as many have.  Some people could look at it as a road block and shy away, I tried to stay positive and take it head on.  Without my struggles and adversities, I wouldn’t be who I am today or have the knowledge I have.  It made me change the way I train, look at Jiu-Jitsu, and my approach to the way I do it.  At the end of the day makes you so much better, because you have to try different things and you have to get out of your comfort zone, which is somewhat the essence of Jiu-Jitsu.  Learn to be comfortable with being uncomfortable.

Talk to us about some of the hurdles that transformed you to the man you are today?

DC:  I’ve had many, but a few really stand out, I started Jiu-Jitsu not because it looked fun to me, but I needed a way to channel my energy in a positive way.  I started training seriously after my second overdose, one I barely survived.  I was in a sort of a coma for about a week, when I finally came out and realized my situation and how bad I was getting, I called my friend at the time and told him I need to do this seriously, I need to have direction in my life because if I didn’t I knew I wouldn’t last long once I got out.  So in a serious way, Jiu-Jitsu saved my life for real.  Another serious hurdle was when I had broken my neck in January of 2009, without really knowing it.  I trained that way for six months before I Finally went to the doctor’s office about it, after my right pec, triceps, and forearm had completely atrophied.  I had nerve damage from my shoulder to my finger and couldn’t feel my right index finger.  The whole time Clean made me push through, sometimes training 8 hour days for days straight pushing through the injury because we thought it was just my arm, not my neck.  For the next 6 months after I did physical therapy, cortisone shots, everything we could fix it to no avail, leading to Surgery December 2009.  All the while, I never stopped training.  I took 3 months off after surgery, came back to train 3 months and competed in the IBJJF world championships my first tournament back.  I’m now dealing with spine issues in my lower back, which at one point about a year ago I was having troubles walking or even getting out of bed, but with the knowledge from the years of dealing with these situations and with the help of a fantastic physical therapist I have managed to recover, train hard and work around it without it affecting me too much.

Everyone’s journey has reason it began leading to you experiencing your share of ups and downs. Tell us a little about how you got started in BJJ?

DC:  I was living a very hostile life before I started Jiu-Jitsu, and I always watched the UFC and always thought I could do it.  Growing up, if I wasn’t skipping school I was getting in fights to get kicked out,  I had lot of anger so before I even put on a gi, I fought MMA on a few shows on a local circuit.  I was 18, fresh out of high school and fresh out of the hospital.  I got released out of the hospital in October 2006 and took my first fight a month later with only a month of \”MMA\” training and a few years of high school wrestling experience.  I got the W by TKO in 1:33 of the first.  I had two more fights, the latter one where I had a pretty serious eye injury to my good eye, I say good eye because I am actually blind in my right eye already and have been since I was a year old.  I made a full recovery from the injury in that fight and realized MMA was not a smart choice, and that was right around when I met Clean and immerse myself full time Jiu-Jitsu with him.  The rest is history.

Dustin Dense is known in the BJJ Community as a respected and intense individual. Tell us about of your experience training under him and most importantly what you learned from him that’s helped shape your life on and off the mat?

DC:  Intensity was an understatement; it was downright insane training from the beginning.  We met Clean when he lived in Missouri for a short period of time but when he moved back to Florida he would come back once sometimes twice a month and we would drill and train for 6-7 days straight, 8-10 hours a day.  He would try to kill us.  I remember guys getting vertigo from the sessions, most would come once and we would never see them again.  At some points I would have to peel my gi off my skin, leaving what looked like bed sores from training so much without any breaks.  The old Clean, he wanted us to be killing machines.  My friend David Vava and I used to wake up at 4 am and drive 2 hours to a gym he would teach at when he lived here, to train for 2 hours then I would come back home and go to community college (which I eventually dropped out of so I could train with Clean more). Those two hours were nothing but us getting smashed as bad as we could by guys who Clean had waiting for us, it wouldn’t stop until Clean was satisfied.  He was crazy, and we didn’t know anything different.

We were young, stubborn, and wanted his respect.  I remember after of those sessions I went to shake Clean’s hand and he looked me dead in the eyes and said \”Your Jiu-Jitsu it shit.  You are shit.  Don’t come down here and train unless you’re going to bring something better\”.  He shrugged my handshake off and I left.  He was hazing us, seeing if we were worthy of his time.  We kept going back until we earned his trust, and we eventually did.  After training for a few years I moved to South Florida for 3 months to live with him and train at his academy he opened, there I got my purple belt that was in 2011.  As always, every day was war and you had to be the last man standing or suffer the consequences.  I look back, after going through all of that I knew that nothing else in life could be that hard, which made me more successful in everything else I did.  He showed me how to work hard, how to push past any point of wanting to quit, how there was a way through any situation no matter how intense.  I owe almost everything in my life to that man, for all the hard times he was always there for me, always believed in me and never let me give up.  I am forever grateful to Dustin Denes.

Are there any other individuals that have helped in your growth in Brazilian Jiu-Jitsu?

DC:  I also cross train at KCBJJ.  Owner Jason Bircher, Travis Conley, Taylor Kettler and Carlos Dallis are my main training partners there.  Although Clean is my master, Jason Bircher and Travis Conley have been mentors of mine as well.  Travis is my go to guy, one of my best friends who keeps it real and says to me what I need to hear, and pushes me beyond my limits in the training sessions.  We have a tight knit community here in KC; they all want the best for me as I do for them.

Switching positions in your current as an instructor at Bodyfit KC how do you use your experience to inspire and help your students?

DC:  I feel like I’ve been down a special and unique path, whether it’s been what I’ve been through with Clean, what I’ve been through with injuries and life in general that I feel I can relate with just about anyone on some level which helps as an instructor.  Due to severe injuries I’ve had to change my game so much that I’ve learned a diverse style, so it’s easy to show people something in all aspects of the game.  I don’t think I’m great at any one thing, just a jack of all trades because I’ve had to learn and switch my style with each injury, which is a great thing because it made me open my mind to so much more and not be stubborn on something and closed minded to the rest, which translates so well to teaching.  I love teaching and interacting, training with students.  It makes you stay on top of your game and relevant, I’m always reviewing things I worked on for years, it’s awesome.

Finally with some much accomplished in your life what does the future hold for Devin Chasten?

DC:  As long as I’m able to train, I know whatever is in store in the future will be great.  Of course I want to go and win big championships, but the journey along the way is what I live for.  Now as a new brown belt, I’m ready to come out of the gate strong, compete as much as possible but also learn and enjoy the road.  With age, development and experience comes wisdom, and I’m ready for more and whatever the future holds!

Devin Chasten Shout Outs:  David Vava at Bodyfit Kansas City, Jason Bircher and Travis Conley at KCBJJ, Anyone and everyone who has ever had a positive impact in my life in Jiu-Jitsu and off the mat, I owe it all to you. Finally Last and not least, Dustin \”Clean\” Denes.  I owe him more than I can ever explain.