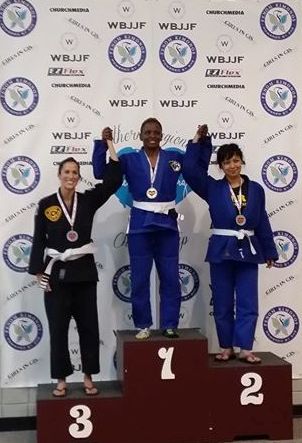 Deneatra’s BJJ journey started with a therapist mandate that she take BJJ for one year or face even harsher reality of being locked up.

Time’s up, my BJJ punishment: Sentence or Salvation

PTSD, my life long affliction.  A never ending cycle of failed counseling.  Days that can’t be accounted for and nights where going to sleep was the dream. Open heart surgery at 27, more surgeries followed. Eventually I just checked out for lunch with no designated time for return.  I was not well.  I can say, my recovery has been very slow.  I was able to work for a small time until one day I was told I couldn’t.  Then, out of the blue I fell back into old habits (not eating, not clean, not functional).  I was close to reposting my out to lunch sign before one of my therapists’ wanted to try something drastic.  He found a way for me to cope, some unorthodox exposure therapy utilizing Brazilian Jiu-Jitsu.  I was livid and was given no alternative.  I was told to complete a minimum of one year doing this martial art.  At that moment I truly thought death would have been better.  I was hoping a car would hit me on the way to my car.

Nathaniel Hawthorne’s phrase rang through my head loud and clear the day my sentence was handed down.  “Words – so innocent and powerless as they are, as standing in a dictionary, how potent for good and evil they become in the hands of one who knows how to combine them.”  Over a year ago I began a complicated journey.  Instead of saying it was a road I was excited to travel down, it was more like a cliff I was thrown off of unwillingly.  Whatever my reasons were for starting BJJ (kicking and screaming) it has been one of those experiences we ALL need.  It has been my ULTIMATE wake-up call. I had no plans when I began other than “ok Dee let’s get this crap over with”.  It’s hard to believe how quickly a year passes.

At this point I’ve reached goals I never set.  I am emotionally invested (which I don’t do) and never saw that coming.  The beginning was awful.  I had to face my worst fears.  I did not enjoy strangers rolling all over me.  Let’s face it, some of the positions were flat out offensive to my delicate nature.  In time the movements and transitions were something I could compare to an intricate lyrical jazz combo.  I was able to cope by looking at each drill as a two count, or a four count instead of oh wow, junk and trunk and all sorts of uh huh in my face do I scream… is this part of the technique… I’m not so sure about what is going on here.  Now, I’ve learned to laugh or at least focus on my count.

Like in a dance routine, all I had to do was smooth out my edges.  The next obstacle I had to deal with was pressure…the overwhelming amount of pressure.  I could drill the steps but the pressure that a person could inflict upon me was a horse of a different color.  It took me to a place that is dark and unforgettable.  That could get ugly for me or my drilling partner.  I will always struggle with that.  It is a trigger that is both a blessing and a curse.  Thus far it is clearly recognizable and I have faced it head on.  Honestly, I doubt anyone likes to feel as if they are being smothered.  It is also a tad bit embarrassing when the person doing it weighs like 100lbs.  That just means she has wicked game.

The obstacle that my therapists are still trying to get me to confront head-on is my ability to decipher a real threat from a perceived one. My inability to judge this puts me and those involved in a difficult position and in this instance I will flee.  The alternative is still a blur to me but from what I’m told Hulk is not the only one that can SMASH. I look at this as 2 out of 3 isn’t bad but my therapists look at it as the third issue is the worst one of all.  I looked at the bigger picture and thought don’t push this.  I now weigh 115 lbs vs 90.  Death is no longer hovering over me.  Let’s just take what we can get and keep it moving.  I can step on the mat with a clear mind.  I can withstand the pressure and dish out some of my own.  The right professor (which I have), the right training partners (which I have), can help you learn to cope with the worst of the worst.  The training gets intense but the right synergy produces amazing results.  My year in BJJ produced some beautiful moments.

I received my Blue Belt, I write about a great sport, I became the WBJJF Regional Champion, I went to my first worlds, I attended my first women’s camps, I have had the honor of meeting and conversing with seven female black belt champions face to face.  I mean I don’t know about anyone else but hey for a person whose plan was to just get this crap over with, I think things have definitely worked out in my favor.  The year has brought all that I never wanted or asked for but everything that was necessary for me to understand why my therapist made the very unique choice that he made for me.  At the time he made the decision I thought, I probably shouldn’t have insulted him for the last three months, but now I have to say the man is awesome at his job. Speaking so fondly of my highs related to my sentence would lead one to believe there were no lows, that is not so.

My lows were in some ways private, personal, and at times interrupted my training.  When a trigger surfaces, I have become so accustomed to holding it in that it takes its toll on my health.  I have had migraines that came on only moments before a class when I knew I was o.k. seconds earlier.  I have laid down just to relax before a session and meditate and the next thing I know, the session is in progress and I’m being awakened and completely disillusioned.  I have gone to the restroom repeatedly to blow chunks because I felt so absolutely disgusted in a training session. Then were the times my blood pressure started being heart attack high and the blackouts followed.  Once those issues surface, I must completely cut ties with training.  There is no question.  If I do know what the trigger is or if I don’t, until things normalize, it is an unsafe risk to continue to ignore the signs.

My final session to discuss all that has happened, good and bad left my therapist with one question, “Now that it is all over, do you understand why YOU needed this?”  Big picture, my entire experience wasn’t just about BJJ. My entire year has been beyond stressful and honestly had I not been training, I do not think I would have been remotely as prepared as I was to cope.  However, my sentence brought a very unreal amount of crazy to my door as well.  I didn’t plan on being pulled aboard a merry-go-round of mayhem. What I learned from all of this is I was a shut-in because the outside freaked me out. It always will, whether I’m locked up in my house, or sitting in a restaurant, or training. My level of trust and confidence in people is never going to be what it once was.  I just hope that if I keep heading in this direction the overwhelming feeling of suffocating will not be as crippling for me. The Big Bad Wolf is real to me. This experience was less about me seeing that my fears are irrational.  It was more about understanding that in life, no matter how good we are, how much we prepare, or what road we take, sometimes BAD THINGS HAPPEN.  I am happy to say, my sentence is complete. I’m nothing but loyal to my Professor 3rd Degree Black Belt Bruno Alves Pinnacle MMA/GFT, no matter where I go from here, I will follow Professor Alves.  Thinking back on this experience in its entirety finally puts everything into perspective.  The sentence is over but my salvation awaits.

“What we are reluctant to touch often seems the very fabric of our salvation.”   Don DeLillo

Working Out Can Enhance Your BJJ Skills

Fix it – Don’t Live with Pain