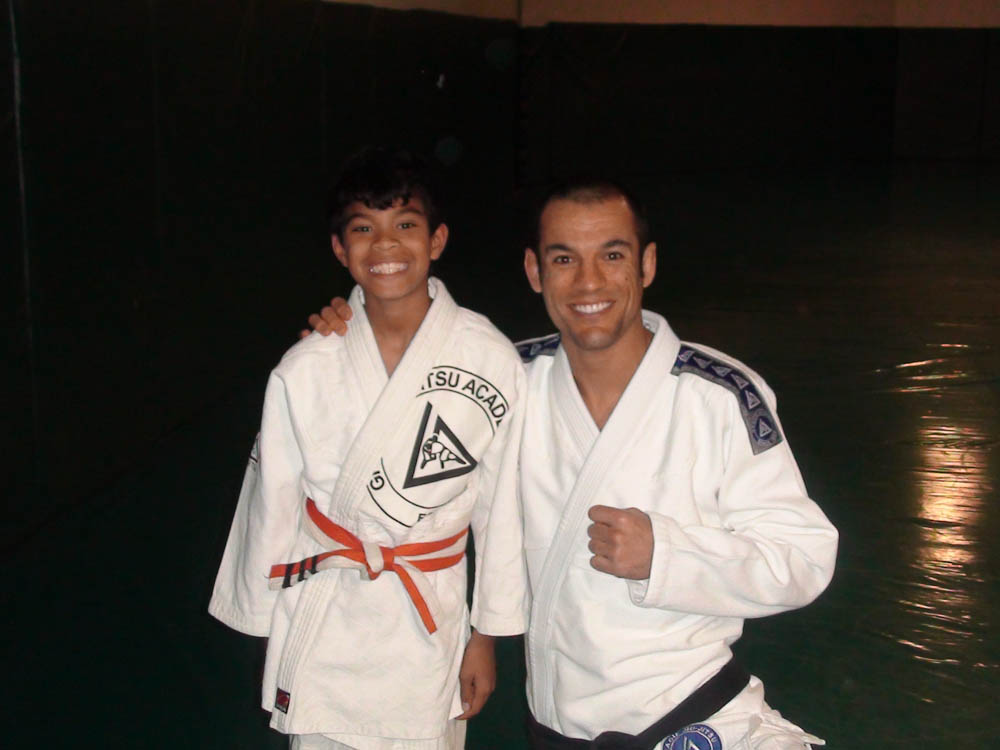 12 year old, orange belt, Tyler Ransom talks about Jiu-Jitsu and how it has helped him with acceptance, discipline, humility and grace in dealing with chronic disease.

“When I do Jiu-Jitsu it’s like I’m on another planet, I don’t worry or think about anything else,” says Tyler Ransom.  This 12 year-old Jiu Jitsu player has been battling a kidney illness called nephrotic syndrome since he was two years old. Specifically, Tyler’s kidneys filtering system malfunctions and causes protein to leak into his urine.  Fluid accumulates in his eyes, stomach and legs, and prolonged leakage can cause kidney failure.

His goal, which started in 2010, has been to raise awareness and needed funds for clinical research and help in finding a cure through his love for BJJ. He has rolled with some of the top Jiu Jitsu players in the world and makes appearances at Jiu Jitsu & MMA facilities nationwide.

When it comes to actual training he has trained with a virtual who’s who of the sport, from Ryron Gracie of the Gracie Academy, Eddie Bravo of 10th Planet Jiu Jitsu and Rubens Cobrinha Charles of Cobrinha BJJ. He credits each of them with not only teaching him on the mat, but also off it, specifically in his battle against chronic illness.

BJJ: Tyler lets start with Ryron Gracie, what have you learned from him.

Tyler: Well, when I started training at the Gracie Academy there were a lot more kids than I was use to and some of them were better than me. I had come from an academy where I was better than the other kids and I rarely if ever had to tapout. The first couple of weeks at the Gracie’s I refused to tap when I would get caught and I would cry not because I was hurt, but because I was angry and upset. One day Ryron talked to me when were about to leave and he had seen me crying, he saw everything that happened when I was sparring. He told me that when he was a kid he got tapped out all the time and that it helped him learn, it helped him learn how not to get caught in the move that was used. Basically what I took from that was getting tapped out was actually a good thing, because I learn from it and I learn defenses to it for the next time I roll. I use the same principle when I suffer a relapse, I don’t get too sad, I kind of see it as getting tapped and I just try and learn from it by writing down what I ate like a week leading up to getting sick, were any of my friends sick, did I take all of my meds. I just think about defenses and how to get better, and have better defenses.

BJJ: What about Eddie Bravo, start with how you met him if you can recall?

Tyler: I met Eddie when I was almost nine years old at the Legends MMA gym. I talked to him and his class about my illness and I was so scared I am not even sure what I said. I felt a lot more comfortable when I rolled with him and then I rolled with UFC fighter George Sotiropoulos who Eddie was training. What I learned from Eddie is it is okay to be different and being different is not a bad thing. To be honest I use to feel bad, because I was different than my classmates, with having to take medications and constant doctor appointments and a special diet. I saw that Eddie had created his own style of Jiu Jitsu with cool names for the moves and he doesn’t wear a gi. Now I think that being different actually makes me stronger than a lot of kids who don’t have to deal with things that I have to. Eddie is also a musician, and I am too, I play the saxophone, so we are similar in a lot of ways I think and he is my friend.

BJJ: That leaves us with your present instructor Cobrinha, what have you learned from him?

Tyler: When I met Cobrinha I saw all of his medals and trophies at his academy and I was super impressed. The truth is when I started training there I had grown really tired of taking my meds every morning and every night and all the other things I have to do. It had become like a chore to stay on track. I have learned from watching what Cobrinha does every day I am there to train or watch my sister train. He is not only very positive all the time, but he works so hard in drilling and in teaching classes. When I see him I always think that I should be more disciplined and work harder, because I see how someone like him has won as much as he has. I know that many people want to win, but if they saw how hard he works I don’t know if they would do it, so I learn from him that if you work hard you see results.

Tyler: Thank you for liking my page and for checking out my website and for donating or just posting nice things. I also want to say that all proceeds go to the Nephcure Foundation a non-profit organization searching for a cure and it helps kids all over the world who are battling this a long with me. https://www.facebook.com/pages/Healing-Tyler/128516963863768

BJJ: If you would like to bring Tyler to your academy and roll with him and show support contact his father Marlon @ marlon@thebelieveitllc.com or on twitter @MarlonRansom.

Daily Rickson Interview Series Wrap Up and Thank You