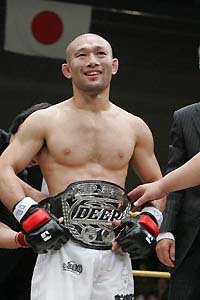 Dan Faggella is a BJJ Academy Owner, No Gi Pan Am Champion at 130 pounds, and recognized expert in the area of leg locks. Dan writes or Jiu Jitsu Magazine, Jiu Jitsu Style, MMA Sports Mag, and more – find more of his leg lock articles and resources at www.BJJLegLocks.com

When you’re an experienced vet like Masakazu Imanari, you’ll find yourself with plenty of interesting war stories.  Especially on the international circuit, you will have a blend of can’s that get tossed your way, up-and-coming prospects, and experienced fighters that will pose a tough task.

Way back in December 2005, Masakazu Iamanri met the latter of the three in Mike Thomas Brown.  At the time, Brown had 15 fights in just four short years!  Proven to be a tough out, Brown had taken on future stars such as Mark Hominick and Joe Lauzon prior to meeting up with Imanari.

Going into his fight at DEEP Impact 22, Brown had not faced a lethal leg lock master like Imanari.

When going against a guy like Brown, who is so well rounded, you must be ready for anything and everything.  Masakazu did a fantastic job of coming out with an unorthodox flying kick which wasn’t that far off from landing.

Unlike his fight against Silva, Imanari didn’t seem to focus on the legs of Brown.  Pawing out his straight punches, he used it to set up a single leg.  Lacking in size, Imanari soon found himself trapped under the heavy hips of Mike Thomas Brown after a wonderful sprawl.

Staying heavy, Brown exerted his dominance from the top by jumping right into side control.  This was very tactical as it didn’t allow Imanari to get a hold of one of the legs.  However, Brown wasn’t able to control for too long and soon found himself back on the feet.

Brown would eventually go on to drop Imanari and take it back to the ground.  Ever the active fighter, Masakazu made sure to break the posture and disallow any sort of passing from Brown, stifling the attack.

Round 2: From Bottom Guard to the Winner Circle

Round two wasn’t much different, as the dominant wrestling and top control of Mike Thomas Brown came into play yet again.  Athletic and strong, Brown was able to keep the fight right where he wanted it, despite the pesky bottom guard game of Imanari.

Imanari relied heavily on throwing up his rubber guard, allowing him to continuously break the posture of Brown, and open up the possibility of passing.  Masakazu was able to stop Brown from doing much work, forcing a stand up not long after.

After a few seconds of the two men bouncing around after the restart, Imanari goes for an outlandish flying scissor kick, seemingly missing on purpose.  Distracting Brown long enough with the move, Imanari dropped right down and gobbled up the exposed left leg of Brown.

With no remorse, Imanari cranked on the knee of Brown, sending him to the mat in pain.  Just like that, this one ended and it beautiful fashion to boot! His grips are out of this world. Flailing people in leg locks in an MMA fight does not make for an easy finish, but position and grips make all the difference. Science of Skill did a recent heel hook article all about grips that you can check out here.

The finish should be no slight to Brown, who had displayed the skills that would eventually make him a household name among the MMA diehards, but it was Imanari’s wonderful submission skills that stole the show in this one.

I Am My Brother’s Keeper: The Mendes Edition

The New Way to Approach Against Bigger Foes