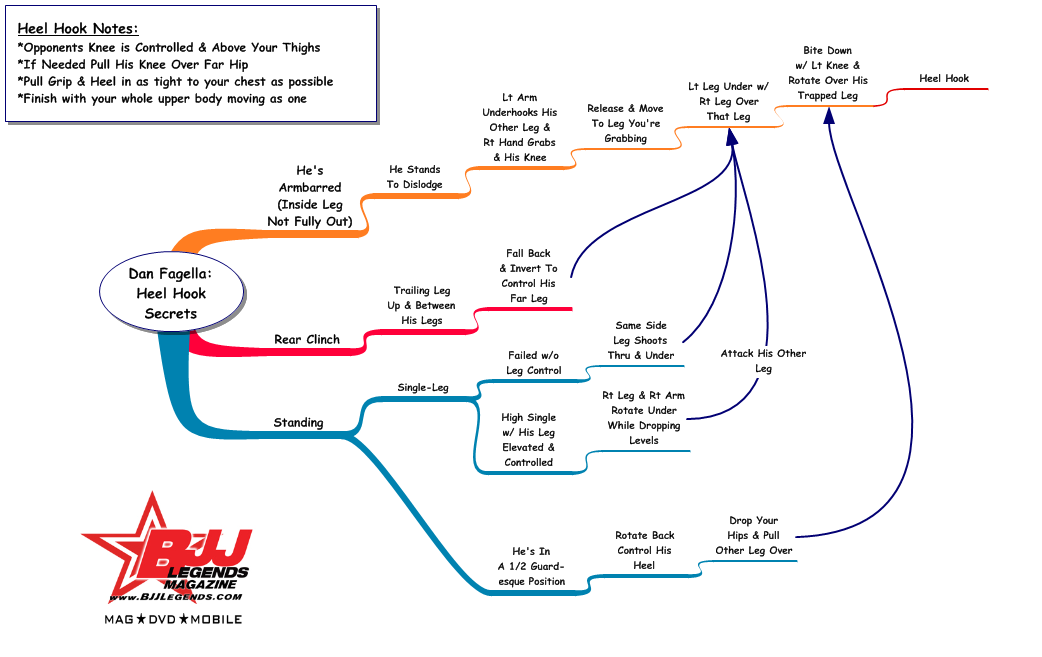 Dan Fagella, of The Science of Skill, has recently begun to offer what he calls Micro BJJ videos and articles. If you’re not familiar with Dan he’s a brown belt in the Rooster/under 130lb division. Dan has been competing at the highest levels most recently winning the NoGi Pans as a brown belt in 2011. Outside of BJJ he is working on his PhD at Univ of Penn with a focus in psychology.

In the MicroBJJ series Dan takes a fairly specific technique or situation and breaks it down to a very high level of detail. Many of these articles and videos focus on leg locks, an area of intense interest to him. Dan was kind enough to provide a copy of his Heel Hook Secrets video and as part of the review I’ll be breaking it down into a handy-dandy map for your easy reference.

The premise of the video is very simple: watch Rosimar Toquinho Palhares as he mangles and destroys the legs of other fighters. Next, attend a Toquinho seminar to see and feel it all in person. Dan then breaks down the techniques he’s learned from Toquinho for his students at Black Diamond MMA. The video is shot at his school as he teaches the class. The video is ~25 minutes long, the audio is clear and visuals are sufficient for demonstrating the techniques. Multiple camera angles would have been ideal but I was able to follow along with what Dan was teaching and he did go back a few times to address details that his students didn’t catch with his initial instruction. It has a similar feel and quality as MGinAction.

Dan demonstrates five main techniques, all of which are broken down in the map below and goes into quite a bit of detail on not only how to get the heel hook but how to finish it properly. I thought that the details on knee placement were particularly useful and something that can easily be incorporated into your game.

Wrapping Up
This video is most useful for fighters and nogi grapplers that are able to use heel hooks as part of the their competition and/or training. The entries could be modified to entries for 1-leg x-guard if you were a gi player but that’s not the purpose of the video. If you’re a blue/purple belt that trains and competes in nogi or you want to see a detailed breakdown of how Toquinho puts people into crouches this is the video for you.

The video is available for a total cost of $7.95 (DVD is free and S&H is $7.95). If you’ve got $8 and you’re interested in heel hooks and/or Rousimar Palhares this DVD might be a good option for a few variations that you probably haven’t seen before. For more of Dan’s work check him out at his Website, Facebook or Twitter. The only bad thing I have to say is that Dan does use an aggressive form of marketing for his products and websites. The information is solid but those types of marketing strategies aren’t for everyone.