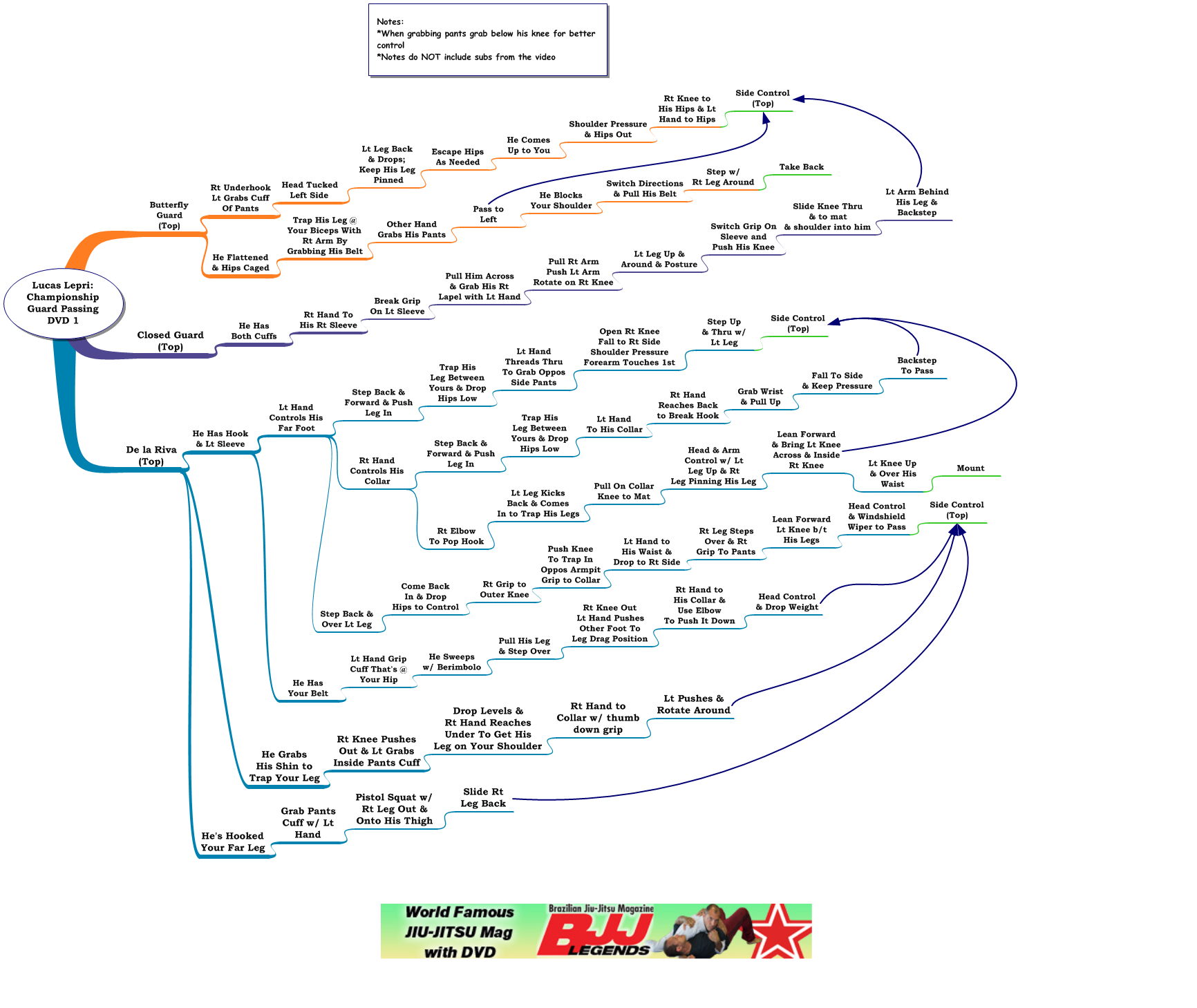 “Lucas Lepri is one of the most dynamic and creative competitors in action today his techniques are smooth and easy to learn I strongly recommend his DVDs to anyone interested in learning the real jiu jitsu.” – Master Romero “Jacare” Cavalcanti

Lucas Lepri has been one of the top lightweights in the world since 2007.  In that time the Alliance black belt has won numerous World & Pan Am titles while teaching at Alliance Atlanta.  Lucas’ newest DVD release focuses solely on passed the guard and spends a lot of time on the De la Riva guard and other open guards.  With the rise of the Berimbolo and successful open guard players this DVD set comes at an auspicious time.  Lucas Lepri’s DVD set consists of 2 DVDs and covers ~3 hours of instruction in total.  In this article you’ll find mindmaps for both DVDs and some commonalities that I noticed as I broke down the instruction.

Technical Specs:
The audio and video are sufficient for the task of relaying the information to you.  Digitsu uses different angles and also picture in picture to show the same technique from different perspectives.  Each technique is gone thru in detail twice and then demonstrated several more times.  Lucas’ English is accented but clear.  From an overall production quality standpoint this is very similar to Stephan Kesting’s instructionals.

Closing Thoughts:
My instructor and I both watched the videos and liked the content.  As someone who watches a lot of instructionals many of the techniques were new to me.  We both also agreed that this isn’t for someone that is a beginner.  Lucas makes some assumptions during his explanations that could create problems for those with less mat time.  At the very least you need to be proficient at standard passes, knee slides, backsteps and leg drags. I highly recommend reading this review at Sherdog by one of their moderators for more information on the set.

Who’s this for?  As a guard player I really liked it a lot.  I was able to get some pointers on not only how to pass the “exotic guards” but also what my opponent may be using to pass mine.  If you’re a competitor and see these guards a lot and/or has problems with them this DVD could be what you’re looking for.  At ~$70 for 3 hours of instruction (28 techniques are shown) the DVD is priced competitively with other instructional DVD of similar length and newness.  Please take a few moments to check out Digitsu at their website, Facebook and Twitter. Lucas can be found at Facebook and Twitter.

As always the study guide is available for download as a PDF at the link below.

Flowchart/Mindmap: How To Defeat Bigger, Stronger Opponents by Emily Kwok