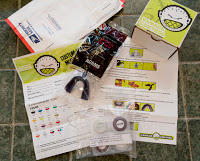 I’ve been participating in some form of sports for most of the last 3 decades.  In that time I’ve had to adjust to different types of protective gear.  In some cases it was easy, others took a while. One thing that I’ve never been able to use is a mouth guard.  My early attempts at using boil & bite guards resulted in frequent gagging until I’d cut it down so much that it barely covered my canines.  I broke down and purchased a nano-sized gel mouth guard about a year ago and while it did fit better I couldn’t roll in it at all.  I felt like I was choking myself.  I spend enough time getting crushed and the last thing I need is to make it harder for me to breath.  At this point I gave up.  I wasn’t meant to wear a mouth guard and I was OK with that.  Then I read a review from Sally Arsenault extolling the virtues of the Bubba Teeth Mouthguard by Damage Control.  I’d been tapped several times that week from jaw pressure (while defending chokes) and decided to give it one more shot to see if someone could finally give me a mouth guard that I could wear.

I sent an email off to Delano over at Damage Control and let him know in no uncertain terms that I hate mouth guards.  They’ve all made me gag and/or been completely unusable for me but if he’s up for the challenge I’d like to review one of his mouth guards.  Delano assured me that his wife (a dentist) would make me a mouth guard that I’d love.  For detailed description of the process involved from getting your molds to getting the completed mouth guard check out this write-up.   The molding process is straight-forward and DC provides instructions, written & video, that are very clear.  15 minutes later I had watched the video, completed my mold and packaged it up to send back to New Mexico.

I want to touch base briefly on why using a mouth piece is a good idea and I can even give you a personal example.  Two weeks before my mouth piece made it to me I chipped one of my molars while rolling.  My partner wasn’t being overly aggressive but I had my jaw tucked in while he was working a choke and before I knew it my teeth were grinding and one was chipped.  This would have been easily prevented by wearing a mouth guard.  The price to repair that chip?  About $700 and even after insurance the out of pocket will be several hundred dollars.  Here is a little more on the benefits of a custom mouth guard.

Test Run
Fits great and once you’ve put it in it’s not going anywhere no matter what you do.  It is tight enough that you will probably have to use your fingers to get it out once it’s in place.  I was able to talk clearly with it in and it has a low-enough profile that I barely notice it while training.  I’ve been wearing the guard during all of my drilling and rolling since I got it and very quickly came to love it.  I can even whistle in it J  Delano was very helpful throughout the process and answered the few questions that I had promptly.

Wrapping It Up:
Delano and Vesna gave me exactly what they promised, a mouth guard for someone that hates mouth guards, and I’m never going to train without my DC mouth guard again.  It’s comfortable, looks cool and works exactly as described.  At $129 this is not a small investment.  The potential savings in dental bills, the fact that they are fabricated by dentist and the overall quality make this a worthwhile investment.  Additionally, supporting a small business that supports the sports that we train in is always a plus.  For more information on Damage Control check out their Facebook, Website and Twitter.

BJJ Gis for the Tall and Skinny