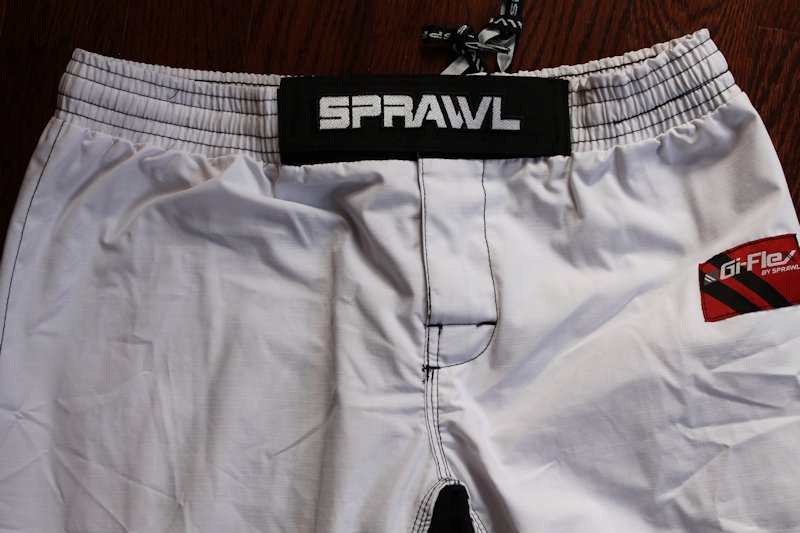 Intro:
Sprawl has been around forever.  They’re one of the oldest names in fight shorts that I can remember and introduced their first pair over 10 years ago.  Since then Sprawl’s line has expanded to include rashguards, clothing and most recently gi pants.  Sprawls original Gi-Flex pants were released about 2 years ago and just last month the Gi-Flex 2 pants were released.

If you’ve ever wondered what would happen if your fight shorts were 2 feet longer, look no further than the Gi-Flex 2 pants.  The waist and upper portion of the pants are almost identical to a pair of high-end fight shorts and instead of ending at your knees the ripstop material extends down to your ankles.

Overview:
The pants are constructed of ripstop and have interior mesh lining from the upper thigh down to the cuff.  The waist is elastic with a Velcro closure system similar to fight shorts and also has the same drawstring tightening system that is common in fight shorts.  The interior of the waist has a rubber strip that is intended to prevent it from slipping.  The pants have an interior mouth guard pocket.  The seams at the stress points are reinforced with triple stitching.  Some overstitching is visible.

A unique feature of these pants is the gusset.  Not only do they have a spandex-like material for the gusset (like the Hyperfly) that extends down a few inches but the rest of the gusset is ripstop and extends all the way to the cuffs.  The knee reinforcements are generous, starting at the upper thigh and extending to the cuff.

Sprawl’s embellishments are fairly minimal.  The waist closure looks the same as their shorts and has “Sprawl” embroidered to it.  The embroidery looks good and is solidly attached.  There is a small, 2.5” x 1.75”, red product patch on the upper left thigh which could be removed by a stitch ripper.  The last piece of embroidery is on the right leg.  There is a pretty large, 16.5” x 1.75”, Sprawl logo in black on the outside half of the leg.  The embroidery starts about knee height and goes down almost to the cuff.  This embroidery is very well done and solidly stitched.

Test Run:
I’ve worn these in gi and no-gi classes.  The pants are very comfortable and don’t hinder your movement in any way.  The improved gusset design allows for a lot of freedom with open guard and the ripstop fabric is both lightweight and strong.  Now that it’s gotten cold I’ve really enjoyed having a good pair of ripstop pants for no-gi.  After wearing and washing them a dozen times they still look good and few of the end threads are visible but this hasn’t affected the seams in any way.  For me these pants have become interchangeable with my regular grappling shorts.

It’s worth noting that the pants didn’t shrink from the day I got them to about 10 minutes ago when I measured them again.  There were a lot of concerns about sizing with the original version.  Sprawl has taken these concerns into consideration and the sizing chart is accurate right out the bag and after several trips to the laundry.  These pants were always washed on delicate, in cold and hung dry (drying is very fast).

Special Considerations:
There are a few other companies that sell pants but most aren’t offering a product that is significantly different that traditional gi pants.  The Sprawl Gi-Flex represents a departure from their brethren by building extensively on their experience with fight shorts.  As a consumer it’s also nice to know that the size you order and the one you get are the same.

The Sprawl Gi-Flex 2 pants are different from anything you’re likely to get when you purchase a gi.  The best way that I can think of to describe them is that they’re a pair of Sprawl fight shorts that have been extended down to your ankles.  The waist closure system, mesh lining and full-length gusset are all features common in shorts but unheard of in pants.  The price, $79.99, is about $20 more than you’d pay for a similar pair of Sprawl shorts and about $30 more than you see for typical gi pants.

So who is this for?  If you are looking for something that can do double duty (and do both well) for no-gi and gi training these should interest you a lot.  If you wear gi pants while training no-gi I’d also consider these.  However, if you’re just looking for extra pants to wear while training gi, these are great but may be more than you want to spend.