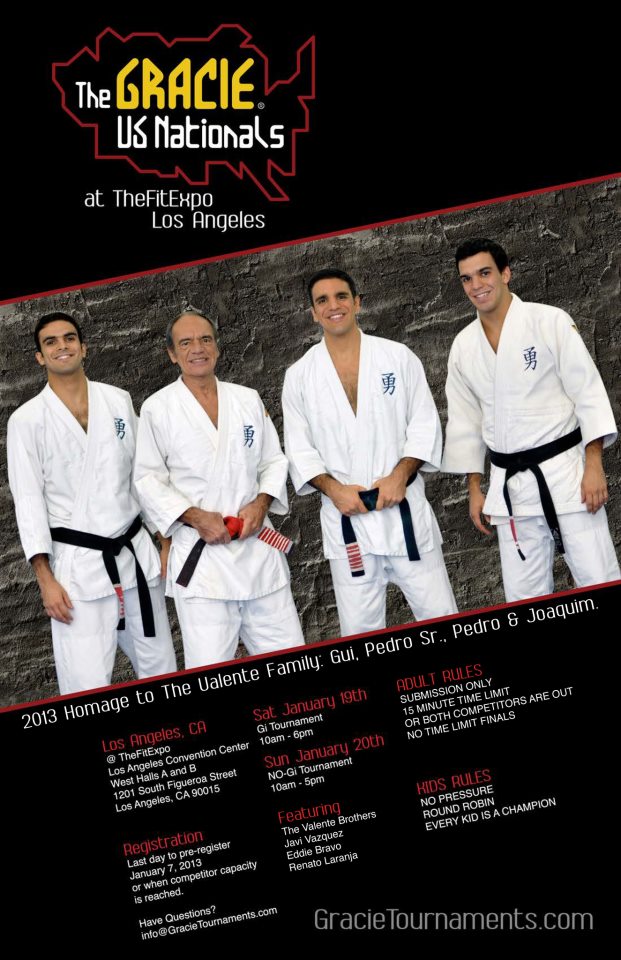 The Gracie US Nationals Return to

At the Los Angeles Convention Center

(Los Angeles, Calif…November 29, 2012) Jiu-Jitsu and Grappling tournaments will be front and center as The Gracie US Nationals return for their sixth year to the West Coast’s largest fitness event, TheFitExpo Los Angeles, Saturday and Sunday, January 19-20, 2013 at the Los Angeles Convention Center, 1201 South Figueroa Street, West Halls A & B.

As always, Rose Gracie will work in conjunction with the TheFitExpo to create the ideal environment and venue for a top-notch competition. TheFitExpo is bringing industry leaders together for a weekend of Jiu-Jitsu, Mixed Martial Arts, fitness challenges and much more.  On Saturday, January 19 at 12 noon, Rose Gracie will present their annual Achievement Award to the recipient who best represents the standards of the sport set forth by Grandmaster Helio Gracie.

“We’re honored to once again be working with Rose Gracie from the legendary Gracie family on hosting The Gracie US Nationals at our 10th Anniversary event,” said TheFitExpo Executive Director, Erin Ferries.  “She always brings a classic competition that unites participants and attendees.”

In January 2012, Gracie made significant changes to the rules of both adult and children’s competitions at The Gracie US Nationals, as her desire was to bring back the original Jiu-Jitsu that her grandfather, Grandmaster Helio Gracie, envisioned from the beginning.  Gracie switched the point system to a submission-only event. This prevents several issues that were previously faced in competition and it gives the competitor 100% power over the outcome of the match.  Also, in an effort to keep the sport pure, random testing of competitors for performance enhancing drugs will be done again this year.

For the children 12 years and under division, all will get a chance to compete and learn from the experience in a supportive and encouraging environment so they can go back home happy to work on the areas that they need to improve on.  No child will leave the tournament with a sense of defeat.

“These changes were much needed in the sport and they were received with praise by the Jiu-Jitsu and Grappling community worldwide,” said Gracie. “These changes represent my grandfather’s rules and what he believes to be the correct way for a student to test his skills against an opponent.”

The Gracie US Nationals will be honored this year with an appearance by the Valente Family from Miami, Florida.  According to Rose Gracie, the Valente Family is the most pure representation of her grandfather Helio Gracie’s Jiu-Jitsu, philosophies and lifestyle.  “Without the Valente brothers I would have not had the complete understanding of what these rules needed to be and certainly would have never been able to make the necessary change in my event to keep my grandfather’s vision alive,” she stated.

Pre-Registration for adults and kids to compete in The Gracie US Nationals ends on January 11, 2013.  More information can be found at www.gracietournaments.com.

TheFitExpo offers something for everyBODY!  Attendees will find over 100 fitness and sports celebrities as well as 20 amateur, professional, Olympic and attendee competitions and 300 exhibits offering the latest in fitness, diet, nutrition, strength and wellness products and services.  During both days of the Expo, many leading fitness professionals will be presenting educational seminars and demonstrations on subjects such as proper nutrition and dieting and exercise philosophies.

ADCC is not the Abu Dhabi World Pro