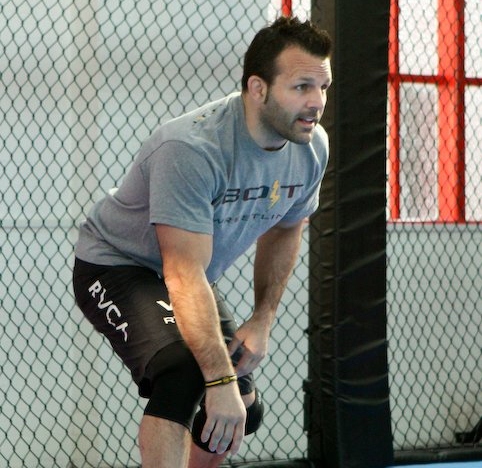 Kenny Johnson’s Bolt Wrestling is a methodical and highly technical and step-by-step guide to wrestling.

Through the course of its evolution Wrestling has garnered the reputation of being ranked amongst the greatest sports in the world. Widely recognized for its combat tactics which incorporates aggressive grip fighting, joint locks, and high impact takedowns its popularity has extended worldwide inspiring many grappling hopefuls to participate in this pastime. Wrestling in term has not only helped introduce the world to great athletes but also aided in propelling other disciplines like Judo and Mixed Marital Arts.

However aside from the accolades and championship titles they may have obtained in their careers wrestlers never truly had a way of identifying themselves which relates to separating an individual’s skills level such as the ranking system employed in combat art forms like Karate, Taekwondo, and Brazilian Jiu-jitsu.

[social][/social]Hoping to eliminate this negative cogitation is world-renowned wrestling coach Kenny Johnson. With over two[bjjad][/bjjad] decades in the wrestling field this experience has allowed Kenny to not only reach great feats in his career but also help great fighters in other martial art categories such as fighting greats like Martial Arts Icon Dan Inosanto, European Champion Paul Daley, UFC Legend BJ Penn, and current UFC Middleweight champion Anderson Silva.

Using the knowledge and expertise he has gained through his venture Coach Kenny has created a unique system that will change the face of grappling in the form of his highly anticipated  DVD “Bolt Wrestling: The White Bolt Series”. Implementing a belt system for wrestlers, the White Bolts Series compilation is the starting groundwork that provides a solid wrestling foundation which can be used for all coaches and athletes of any skill level for their gradual progression in the art.

The Bolt Wrestling DVD is an extraordinary piece of work which is a standard-bearer product that demonstrates the true workmanship of how a video instructional should be made and taught. When it comes to the format presentation the film is well organized. Divided into seven sections, Bolt Wrestling is broken into a hierarchy of sectors that builds one’s improvement and understanding at the White Bolt level.

Although there are a lot of great material presented in teachings videos out today the major negative seen in most of them is they don’t have a chain linkage which helps the observer build on a solid game.  When watching Bolt Wrestling the viewer can develop a learning course that helps broaden their comprehension of basic skills such as a proper stance, sprawl, or gripping to their transition into learning concepts on  take downs and reversals.

Being that Johnson has years of experience in wrestling it is no surprise that the DVD comes equipped with not only the best instruction in wrestling but also surpasses other material taught in other combat sports alike. His delivery, confidence, and breakdown of each move is straight forward which keeps practitioners attentive throughout the entire movie thus leaving no uncertainty as to the phases it takes to learning each technique. These qualities not only showcase Kenny’s ability to communicate effectively with his audience but also show an individual who proudly stands behind and believes his work 100 %.

The visual presentation of the White Bolt Series is by far one of the most astonishing pieces of work ever produced. Stepping out of the typical one camera recording setup seen in most films today, the crew of Six Digits Productions picked a more cinematic approach during the making of this film. Shot with the same cameras that were used in blockbuster flicks like Avatar and Pirates of the Caribbean by using two F-900 HD video cameras on Panavision glass the team presented a unique arrangement that covers and focuses on every angle of each technique presented in Kenny’s DVD.

This DVD undeniably breaks massive barriers in so many areas which facilitate the starting genre of an exciting new revolutionary trend in grappling. After watching Kenny Johnson’s “Bolt Wrestling: White Bolt Series” DVD spectators will definitely receive a jolt of energy which will inspire them to improve in their wrestling skills and want to learn more of what Bolt Wrestling has to offer in the future. Whether you are a wrestler, judoka, jiu-jitsu practitioner, or mixed martial arts fighter the blueprint presented by Johnson in this instructional caters to all grappling combatants thus making it a major must have item for any buyer’s combat sport collection.