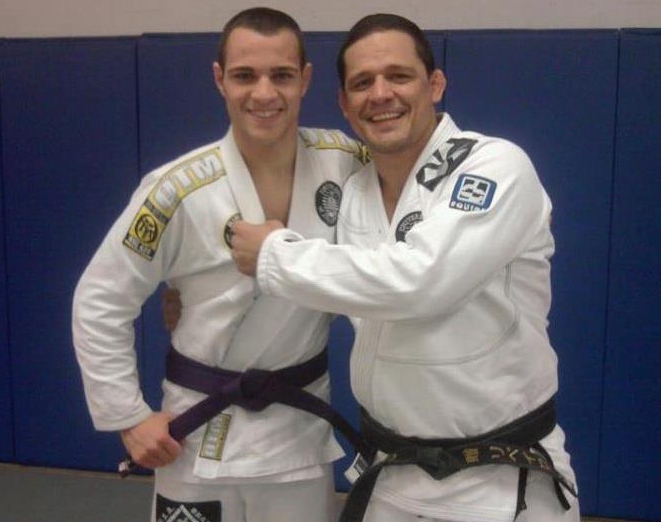 The Ribeiro Jiu-jitsu association has been the corner stone of the production of some of the best grappling talent in the world. Many great practitioners like Jake Mapes, Tom Oberhue, and Rafael Lovato are all a part of this very prestigious organization whom have gone on to achieve great feats in their athletic careers. Another individual hoping to solidify his own mark of greatness is Brazilian Jiu-jitsu Purple belt and mixed martial art fighter Waseam Dannaoui.

Born in Fort Wayne, Indiana Waseam Dannaoui began his grappling chase competing in wrestling from junior high unto his graduation from High school. Hoping to continue his athletic endeavors, he soon became interested in pursuing a career as a mixed martial arts fighter after watching the ever popular Ultimate Fighting Championship.

[social][/social][bjjad][/bjjad]Searching for an outlet to fulfill his needs, while attending college at the University of Northwestern Ohio he would soon get the break he was longing for. Joining The Triangle JJ Club he would begin his development as a Brazilian jiu-jitsu practitioner under the tutelage of Jeremy Harris.

Building up self-discipline through time after months of competing in grappling tourneys and pouring a mass amount of dedication to his training upon receiving his blue he started training for his first amateur fight going on to accumulate a record of 4-1.

With a deep desire to advance in his skills as a martial artist Waseam would go on to make the biggest decision of his life. Seeking to to learn from the source of his instructor’s teachings and advance his fight career  packing all his belongings into a 2006 Black Hyundai Tiburon, Dannaoui  hit the road moving to San Diego, California to continue his MMA aspirations and  learn BJJ from the legendary Saulo and Xande Ribeiro.

Since his arrival to the University of Jiu-jitsu in 2010 the Indiana native has undergone a tremendous growth on and off the mat.This transformation has led him to great success in the grappling circuit in local tournaments all across Southern California which has gained him the distinct honor of being promoted to purple belt by the legendary Saulo Ribeiro.

“Training at the University has helped my progression tremendously, my technique has gotten a lot better, I noticed after training here under Saulo I have to become a better person on and off the mat, Everyone at the university is like a brother to me and anyone is willing to help you if you ask, I am definitely glad I came to the university and can’t imagine being anywhere else.” Waseam said.

Aside from his grappling endeavors pursing his dream of becoming a professional fighter Waseam undergoes his development as a fighter at The Arena MMA in San Diego, California.With a great environment which finds him surrounded by some elite fighters that have fought on the highest MMA competition level Dannoui has obtained a wealth of knowledge during his tenure there which only increase his chances of becoming a successful fighter in the future.

“The experience training at The Arena has helped me become a better fighter because I am working with great coaches and fighters that have been around the game for a while now.”

With many accomplishments already under his belt, Waseam Dannaoui has his eyes set on the future. His future goals include: continue with his progression in his pro fight career, fight in the UFC, and compete at the black belt level in Brazilian jiu-jitsu.

Nevertheless although the young martial artist journey is far from complete through the course of his maturity Waseam Dannoui has developed the quality traits that have allowed him to push through the highs and lows in order to experience the great opportunities that this sport has to offer.

“In my journey as a martial artist, I have learned to become dedicated because that is what takes us further, you have to be willing to pay the price of hard work and training and make life sacrifices to become a champion. I learned to be humble and to get respect you have to give respect,” he said. “I also learned that it is all in your heart whatever it is in you do it has to come from the heart, who is victorious doesn’t come all from there athleticism it comes from there heart and passion.”