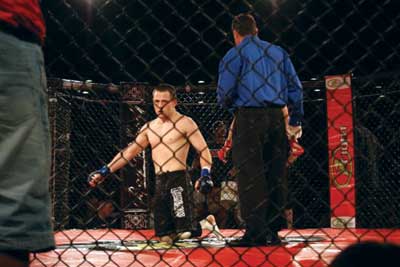 (Check out Matt’s charity www.FightIIWalk.com) It said that “The ultimate measure of a man is not where he stands in moments of comfort and convenience, but where he stands at times of challenge and controversy”. “Everyday in bjj and in our daily lives we are often forced to deal with obstacles which prevent us from living happy lives. Whether it is dealing with a stream of loses in competition, a serious injury, or even losing your job.

Whatever the case may be it is clear that sometimes life can be pretty unfair. However in a lot of cases those problems that we are forced to deal with are merely roadblocks that try to stop us from reaching the true goals that we wish to accomplish in life.
Take MMA fighter Matt Betzold for example. A 26-year-old fighter from Phoenix, Arizona Matt Betzold has had many tough battles on the mat and in the cage.

[social][/social][einset][/einset]However the real battle began at the age of 6 years old after an unfortunate accident left him with one leg, leaving him not only with the unfortunate task of dealing with his disability but also the constant day to day abuse from his peers. However instead of letting the situation take control of his life, he took control of the situation overcoming the day to day challenges that came his way. As time progress he decided to set new challenges for himself getting into grappling which he excelled at greatly by rising in the ranks beating some of the best in the game and later getting into MMA , becoming the first ever amputee MMA fighter.

In this interview we take a look at how one man beat the odds and turned his misfortune into a stepping stone toward fortune.

I want to start off with a personal question. Please tell us how did you ended up with one leg?

Matt: I was 5-years-old, when I met a supposed “family friend”.  He was living with us at the time.  He ended up giving me some candy that he had laced with poisonous mushroom spores. My parents took me to the hospital, when I started feeling sick and throwing up.  The mushrooms cause a bunch of reactions in my body, including a blood clot, which in turn cause the loss of my leg. They tried giving me antibiotics, but my body rejected them, which is the cause of my scars that you see.  I slipped into a coma for 6 weeks, and woke up after my 6th birthday with no leg, and little to no mobility of the rest of my limbs.

It must have been a real shock waking up to that challenge as a 6-year old. So what was it like growing up ?

Matt: I was ridiculed so much from the time that I lost my leg, that my first real fight was in third grade.  After that, I just kept fighting until I got into high school.  I was not going to take people talking or looking down on me.  Once I found the outlet that MMA gave me, I started taking my aggressions out on the bags, and kids started leaving me alone.  I come from a huge family with 8 siblings, and we have always been a scrappy family.  I have always been close to my brothers and sisters, and I still am.  They are my family and best friends.

Before getting into MMA you started grappling. How did you come up with your superb but unorthodox style of grappling?

Matt: My style has been the product of 10 years of training. Constantly modifying, and evolving my own moves on top of everyone else’s moves, to come up with something that works for me.

Aside from all of your accolades over the years,  last year you finally got the opportunity to represent your country the grappling worlds. What did that feel like?

Matt: That was honestly a dream come true.  That is the closest I have ever been to an Olympic event, and I was so honored to represent my country, and help my team bring in the win.  Plus, it was also an amazing experience to be able to train in Florida at American Top Team for two weeks.

What was the overall experience like for you in terms of the team training, the adventure, and most importantly getting 2nd place in the event ?

Matt: It was an amazing experience to train and compete in Florida.  Getting second place, gave me some recognition from people who might have doubted me before, though I would have been happier with first place. haha.  However, I did lose to my own countryman, who now is the current Bellator Champ, so I am not going to be too hard on myself.

After all you accomplished in grappling, just recently you got into MMA, what inspired to make career transition?

What are some of your training methods you go through while preparing for a MMA fight since it involves striking and grappling ?

Matt: Lots of sparring, lots of rolling, pad work, bag work, cardio, wrestling techniques, strength and conditioning.  Plus lots of circuit training, pretty much how I always train, I just amp it up before a fight.

By being the first MMA amputee fighter, what doors do you think this will open for future fighters with similar conditions to yours?

Matt: The sky’s the limit.  I am honored to be the first commissioned amputee fighter, and hope it will make the battles for other amputees easier.  However, I don’t want to see a bunch of amputees try to jump in the cage, just because I am.  They need to be properly prepared and trained otherwise I can see it working against me.

Did you experience any self doubt through your progression?

Matt: The only doubt I had was that the commission would not let me fight, but I never doubted myself or my ability to succeed, if I worked hard enough.

Obviously there are a lot of people who support you and are inspired by you. How do you feel about having so many people say you are an influence in their lives?

Matt: That, to me, is a success in itself.  If I were to quite today, I would know that I have still touched people’s lives, which is an amazing feeling.  Knowing that I have a positive influence on people, also gives me more drive.  I want to be the best, not just for me, but for them as well.

How about the other side of the coin. Are there are any “haters” on you road to success?

Matt: Yes.  I have encountered a bunch of haters on my journey to the cage, and since then.  I have had some people that thought I was a fraud, and had their minds changed once they saw my fight.  However, there are those out there, that think my fights are rigged, or a joke.  All I can do, is just prove them wrong.  But, I always say to them that The Den is always open, and I’m always there training if they want to stop by.

Tell the readers about your non-profit organization?

Matt: I’m starting a non-profit organization called Fight II Walk.  Our goal is to raise money to help under privileged amputees get the prosthetics that they need.  We would also like to help disabled youth get involved in able body sports. Our main goal is to raise the confidence levels in anyone with a disability, through sports. Teach them they are good enough to compete with able bodies, that they are just as able as anyone else. I started this program, because bottom line, most insurance companies don’t cover prosthetics, if they do it’s a very low percent.  I want to be able to work with amputees, and others alike to teach them to find their own way of fighting and defending themselves. If they choose to do so, get them ready to compete not limited to grappling. If anyone is interested in getting involved, they can go to www.FightIIWalk.com.

With everything you have accomplished, what are the goals you would like to accomplish?

Matt: Absolutely, my next goal is to get into the UFC.  Some of the readers may not agree with me fighting, but I am waiting for that 125 lbs division to be added, so I can show everyone what I can do.

Finally being one that has overcame adversity in your life, do you have any advice  for people who go through daily challenges in their lives?

Matt: You should never let anything get you down, and always remember things can get worse.  Overcoming the obstacles in your daily life will make you a stronger person.

Before we wrap up do you have any shout outs you would like to give?

Matt: For me, God comes first, so I’d like to thank him for making everything possible. I’d like to give a shout out to my wife, Carrie, who has been with and supported me from the beginning, and my kids, Cross and Faith, for giving me the drive to be a better man.  All of the coaches and staff at The Den, my training camp, along with all of my training partners.  My family for always supporting me, and standing behind me.  I’d like to thank On The Mat, for always supporting me, and being in my corner. Fikes brace and limb, because without them I wouldn’t be walking right now.  Also, to every fighter who has gotten in the cage with me, and not tried to make excuses as to why they can’t fight me.

Well that wraps things up. Thanks for your time Matt and best wishes in the future.

Matt: Thank you, Monta.  I appreciate being able to get my word out there, and share my side of the story.

The Charitable Acts of Jeff Larsen