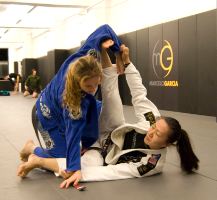 Emily Kwok is a black belt and Mundials champion, a project manager for MGInAction.com, is putting together her own BJJ [social][/social][einset][/einset]program, and runs various grappling camps for women with other notable female BJJ practitioners.

She recently sat down and offered to shed some light for us about women in grappling.

BJJ Legends: Why is BJJ good for women? What can women gain from learning it?
Emily Kwok: From a fitness standpoint, this sport has helped me integrate daily activity into a lifestyle. I’m in the best shape I’ve ever been (at 30) and it’s made me appreciate how much our bodies are capable of doing.[bjj][/bjj]

Additionally, I think BJJ is an excellent sport for women to be involved in because it can really help you own your body and build your self confidence. Regardless of gender, many people feel uncomfortable in their own skin and I feel that BJJ helps give you a very powerful sense of awareness and control over your own movements. As your understanding of the sport matures, I believe it teaches you how to successfully interact with your environment. The nature of live training helps you recognize what you know, and what
you need to go back and work on. When a person is able to feel empowered by their physicality and become comfortable with their weaknesses, I believe it helps them become a stronger person from the inside out.

[blockquote class=”quotes”]‘Own your training’…meaning what you put in and get out of training isn’t anyone else’s responsibility but your own.[/blockquote]

BJJ: Does BJJ offer women specifically any advantages/disadvantages?
EK: I think what many of us may consider to be disadvantages can somehow always be turned into an advantage with BJJ. For example, it’s not so fun to always be the smallest and weakest in the class, but by being put in that position, you are forced to develop your speed and technique to excel. I sometimes have to tell myself the deeper the pain, the bigger the payoff. There isn’t a lot of room to make excuses in BJJ. As my good friend Val often says, ‘Own your training’…meaning what you put in and get out of training isn’t anyone else’s responsibility but your own.

BJJ: From what you’ve seen, what is the general male sentiment on women in BJJ? How well received are women?
EK: My response goes back to ‘owning your training’. Own who you are and what your intentions are. I owe almost everything I know to my male instructors and training partners. I didn’t have female role models as I was coming up and it’s only until recently that I’ve been able to relate and discuss successes and hardships with my peers. As a female, if you don’t make excuses for yourself and you go in to learn and train hard just like any other male in the class, they will see that. In many cases, male teammates have even been inspired by the lengths that you go to in order to hang in there, and they go out of their way to help you get the most out of your training. On the other hand, if your intentions are not training based and you objectify yourself and make illegitimate excuses for why you can’t or won’t do something, expect that any of your classmates will not receive you well, male or female.

BJJ: How do we get more women involved in BJJ?
EK: As women, we aren’t culturally raised to roll around on the ground and roughhouse. It can be a very foreign and intimidating experience to get on the floor let alone let someone drape themselves all over you! Creating a less aggressive environment while introducing a new female to the sport can often help (ie. Don’t pair a new girl up with your 225lb friend Shrek), in addition to creating a healthy support network around her. Women are different creatures than men, I find that we learn differently and sometimes we need to recognize that and speak our own language. If you have a female friend that wants to try BJJ out, support her and help her out with some background info, details when they’re learning a new movement, and don’t necessarily throw her into the wolves. Also, maybe introduce some of the more technical and helpful male training partners that you’ve had in your academy. Once they become more comfortable with the idea of what the sport is and seeing how they might fit into it, they will most likely see the benefits of it and stick around.

BJJ: Any advice you would give to female grapplers?
EK: Keep training hard and do your part to maintain a respectable image of females in the sport. Many of us love BJJ just as much as anyone else and we want to make sure that the focus is kept on our participation in the growth and evolution of the sport.