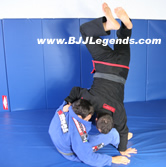 BJJ Legends had a photo shoot with Leo Vieira’s acclaimedbrown belt Ary Farias. But that’s a story for another time (BJJ Legends Issue [einset][/einset]2). After everything was said and done I pulled Leo aside and asked, so what’s the story? Give me the “official version” and the “off-the-record-version” of the break-up. Leo says, “There’s only one version.” And what I thought would be a two minute explanation turned into a half an hour story. Here’s a recap.

Brasa was started in 2004 by the brothers Leo and Ricardo Vieira, Chico (Francisco Mendes) and Comprido, (Rodrigo Medeiros.) The four were equal part members. Brasa’s name was a little inside joke. Brasa are the coals used for the barbeques or Churrascarias that populate much of Rio. The word Brasa appears everywhere. Because of this, there is no color red in the Brasa logo.

Also because there were four members in order to do or change anything all four members would have to vote and a unanimous vote was required for action. This was very aggravating because it was hard to get all four together and harder still to get all four to agree. Leo describes his position as “in-the-center” trying to reconciliate the
Brasa Team.

In June 2008, Leo welcomed his new son Daniel into the world. This prevented him from traveling to the US to participate in the 2008 World Championship. He said that during the competition his phone was ringing off the hook; students needing to register, students needing help with weigh-ins, students needing coaching, etc. The situation was ridiculous. Of all the partners in Brasa, he was the one who could help least because he was in BRAZIL and not LA.

Finally, Leo says, he realized that for all the frustration, time and effort he might as well have his own association where he doesn’t need a unanimous vote to get things done. He and his brother seceded from Brasa to create CheckMat.

The name CheckMat is a confluence of two thoughts. First Leo did not want his name in the name of the new association. He believes when someone’s name is used then ego gets wrapped up too and that is not what he wanted with this new association. Second, Leo has been curious about chess for a while because some people after having tried Jiu-Jitsu often liken it to chess. He did some online research and found amazing similarities. Mostly about how both sports get in your head. He makes an example of the Russian chess masters and the hours a day they spend thinking about chess. Then he draws an example of inmates who are banned from playing chess in jail as a result they play without pieces or boards. All the brainpower needed to focus on the play as well as the strategy causes some to go insane.

A little more research revealed that the word Checkmate is from Persian and literally means the king is left unable to escape, from shh king + mt left. He liked the double entendre of King + Mat.

Amazingly at the 2008 No-Gi worlds Leo and his team fought under the CheckMat banner and won 1st place, their first competition and only months after leaving Brasa. There was some mix up at the podium where Gracie Humaitá was awarded the 1st place trophy but a quick call the next day pin pointed a computer error in calculating the points and designated CheckMat the 1st place winners. Leo made a quick call to Brazil to make sure his trophy was warm and dry.

CheckMat brought 9 fighters to the 2008 No-Gi worlds and returned with 6 gold medals.

The only other CheckMat to compete was Lucas Leite who was disqualified.

There are many many good fighters who made the move to CheckMat. When pressed to name names Leo said, “We have a lot good fighters. I can’t say some names because everybody has big potential to win, and i don’t want to forget somebody. And next year we will have more new BLACK BELTS.”